Housing protest in Pietermaritzburg leaves residents in the dark 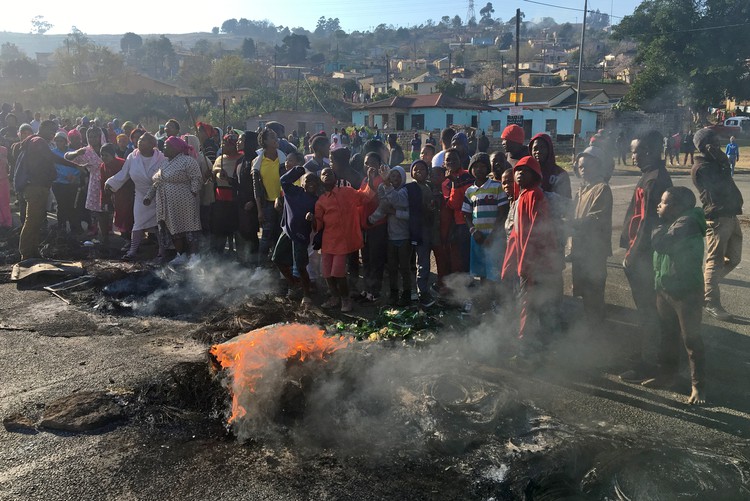 Residents of ward 29 in Pietermaritzburg took to the streets on Wednesday, demanding the ward councillor be removed. Photo: Nompendulo Ngubane

On Wednesday, residents in Pietermaritzburg barricaded roads leading to Copesville township with burning tyres and rubble, demanding the removal of their ward councillor. Taxis were stopped from operating on the main road. Protesters burnt three electricity transformers, leaving sections of Haniville, Swapo and Copesville without electricity.

Busi Mkhize, who joined the protest, said residents have not had a community meeting since last year. “We have been waiting for houses since 2004. That is why we have started to invade vacant land. No one will stop us from building our houses. Some of us are old but we live with our parents. You can’t watch your dad or brother taking a bath.”

On Monday, hundreds of residents occupied vacant land owned by Msunduzi municipality. The municipality said the land was earmarked for a housing project to be built next year.

Residents have accused ward councillor Siphamandla Madlala of being “incompetent” and want him out of office. Resident Menzi Ngcolosi said, “He has done nothing for residents. There are 47 houses that were built for people who are needy. There are people who were on the list to occupy those homes, but they have been occupied by people we don’t know.”

“We don’t know how those people became beneficiaries. We want answers, but he is never available to respond to us,” said Ngcolosi.

Zamasile Dludla, 67, shares a one-room shack in Haniville with seven adult grandchildren. “Some of us were on the list to benefit from the 47 houses. No one in this area has benefited.”

Madlala denied the allegations. “People living in those houses are destitute residents. The houses were not strictly for ward 29 residents. They are part of the Sukuma Sakhe project.” This was confirmed by Mbulelo Baloyi, spokesperson for the Department of Human Settlements.