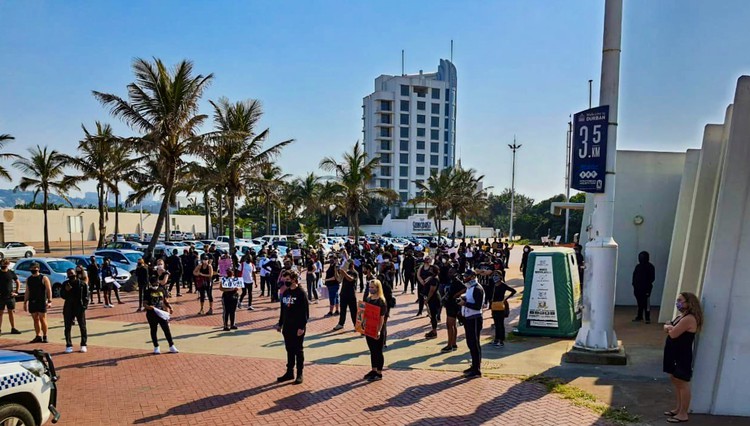 About 40 people were arrested in Durban on Saturday while protesting against gender-based violence. Photo supplied

Organisers of a protest against gender-based violence (GBV) are outraged after about 40 participants in a Durban protest were arrested by police.

The protesters had planned to deliver a memorandum of demands to the municipality.

In a statement, the Anti GBV Movement said despite the demonstrators adhering to social distancing police broke up the protest.

“They threw members into police vans with no social distancing,” the organisation said.

The organisation acknowledged that its application to hold the protest had been denied, “but we continued to organise it following a majority vote by protesters”.

“We understand that it was for a good cause but they shouldn’t have continued without a permit,” said Durban Metro police spokesperson superintendent Parboo Sewpersad.

He said arrests were made under the Disaster Management Act. Those arrested were taken to the Durban central police station before being released with a warning not to return to the march.

KwaZulu–Natal police spokesperson Captain Nqobile Gwala said the crowd of about 200 were told to disperse. ”The allegations of police brutality are unfounded,” she said.

Kamryn Smith, one of the protest conveners, said, “The protest was about gender-based violence and it is a subject that is too close to home. We couldn’t just leave it. We wanted to get our message across. What happened with the police was horrendous. There was no need for them to be brutal as people were listening to them and dispersing.”

Nokwanda Chonco, KZN spokesperson for Sex Workers Education and Advocacy Task Force (SWEAT), said they were unaware at the time that the protest was illegal.

“When we got to the meeting point at the Suncoast, we were told to separate because no big crowd is allowed. Our group was a big crowd so we went and stood across the road with our own placards and all of the sudden police were saying we must disperse because we are participating in an illegal gathering,” said Chonco.

She said when they were arrested they were crammed into police vans and put together in one cell before being released.

Charlie Brown, another convener of the protest, said, “The SWEAT ladies were put in one cell. How is that not breaking the [Covid-19] regulations? There was no social distancing. It hurts us the way the police handled us on Saturday. With so many protests happening across the country, we just don’t understand why the Durban police handled us the way that they did.”

The memorandum sent to the office of the KZN Premier, the KZN Department of Social Development, and the mayor, includes demands for: the sex offender’s list to be made public; a progressive and inclusive sex education syllabus at all schools; Parliament to fast track all proposed amendments regarding gender-based violence.