Dispute between SJC, EE and provincial government over whether key recommendation of Khayelitsha Inquiry has been implemented 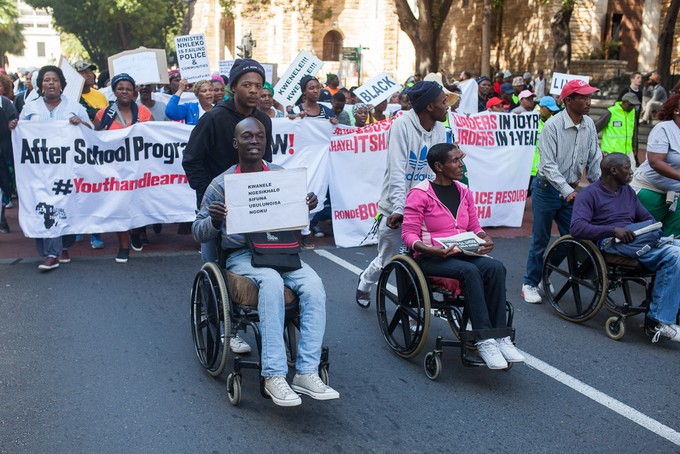 Mfusi Nondolile (left in wheelchair) was at the front of a march earlier today to the Western Cape provincial government offices, demanding action to be taken to make schools safer. Photo: Ashraf Hendricks

A few hundred people, including school students, marched to the Western Cape provincial government offices in Wale Street this morning. They demanded a safe environment for their education. The protest was organised by the the Social Justice Coalition (SJC) and Equal Education (EE).

A memo addressed to Premier Helen Zille and MEC of Community Safety Dan Plato was accepted by the premier’s spokesperson Michael Mpofu.

The key demand of the protesters centered around one of the recommendations of a commission of inquiry into policing in Khayelitsha that completed exactly two years ago on 25 August 2014. The commission recommended that a task team be established to address youth gangs. The task team was supposed to consider problems such as weapons in school, protecting children when they travel to school and several other issues related to youth gangs.

“We believe insufficient action has been taken to give substance to this recommendation. To date a multi-sectoral task team on youth gangs has not been established and the strategic plan to address the issue of youth gangs is now a year-and-a-half overdue,” read the memo. It demanded the full implementation of the commission’s recommendation.

At the front of the march were disabled people from various townships including Europe, Barcelona, Gugulethu, Kraaifontein and Nyanga.

As they marched from Keizersgracht Street to the provincial government, they sang struggle songs and raised placards with messages such as, “Rondebosch had six murders in ten years; Khayelitsha had 326 in one year.”

Phumeza Mlungwana, General Secretary of the SJC, told the story of how last week a learner from Bulumko High School was stabbed and the school has been closed. “The government doesn’t take the life of a black person seriously. They really do not care about blacks,” she said.

Ndumiso Mnyungula, a grade 11 learner, from Matthew Goniwe Memorial High School said, “We are not safe at our school and we are affected by gang fighting. Gangsters wait by the school gate and harass us. Some of them trespass into the school, hide and stab learners they believe to be their enemies.”

Mfusi Nondolile, who is in a wheelchair, said he could not miss this march because in Gugulethu where he lives there is a problem of gangs and thugs who rob, stab and rape. He said it is not safe for him to go around with valuables. He said he is targeted because he is disabled. “Things in his community are bad. They even steal a wheelchair if left outside the toilet.”

Nomlungisi Qezo, a provincial organiser for SJC, said: “After school programmes will help decrease crime because our children will become occupied and not get involved in criminal activities.”

In a media statement Mpofu wrote: “The Western Cape Government has made progress on all the Khayelitsha Commission recommendations directed at us. We dispute any suggestion to the contrary.”

“No less than 13 of the 20 Khayelitsha Commission recommendations relate directly to SAPS, and all 20 of the recommendations are dependent on Saps.” Mpofu also wrote that the Khayelitsha Cluster Commander, Major General Johan Brand, has been doing everything possible to give effect to the commission’s proposals.

Mpofu wrote: “We fought all the way to the Constitutional Court for the Premier’s right to create this Commission.” He said that initial opposition by Saps to the Commission’s findings and constant instability in Saps management “has been a major frustration to ourselves and our community partners in Khayelitsha. This situation cannot be resolved by protesting outside our offices.”

Mpofu said a youth gangs task team is being established through forums in Khayelitsha established by Brand. Mpofu also said that the province has provided “extensive input to the National Anti-Gang Strategy” and “We are eagerly awaiting the formalisation of this strategy by the national Saps”. He said that R30 million is budgeted for the Safe Schools programme this year.