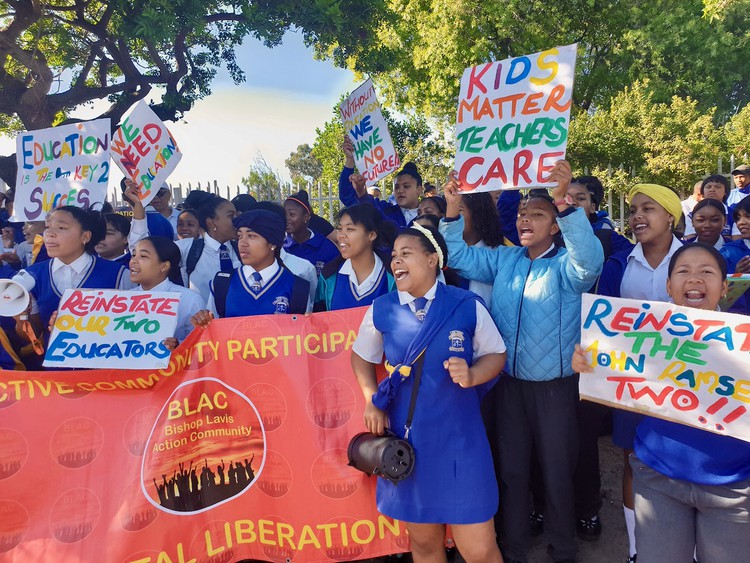 About 50 people picketed outside the John Ramsey High School in Cape Town on Wednesday. They included learners, parents, members of the school governing body and the Bishop Lavis Action Community (BLAC).

The picketers were demanding the reinstatement of teachers, Jeremy Hendricks and Peter Andrew Jacobs, who were dismissed on 28 October, accused of fraud.

Learners in their school uniforms chanted: “We want our teachers back!”

BLAC civic activism coordinator Abdul Karriem Matthews said, “The pass mark that is set by national government is 30%. So when learners fail to achieve that pass mark, there is a policy called the promotion and progression policy, which says if the learner achieves between 26 and 29%, the school senior management has to sit down with the subject heads and the affected teachers and they have to look at ways and means to promote these learners.

“But what happens when a learner achieves less than 26%? It would be considered as an outright fail and no sit down should take place. What happened in this instance was that a senior management team was called. One of the teachers said no to the promoting of these learners. The management then took the decision to promote the learners. Now, according to the Western Cape Education Department (WCED), that is fraud,” said Matthews.

“This school has a one [teacher] to 38 [students] ratio. Add on insufficient learner support and teachers, lack of resources, a dismal education system, economic and environmental factors … a gang infested area. It is very difficult for our learners to achieve. With this ratio, teachers cannot provide individual attention to learners. This is the reality.

“So when learners fail, the ones that have passed the previous grade will now join those who have failed. When there are more children in the classroom, there’s no guarantee that the WCED will provide more teachers.

“So the schools are sitting in the position of having to promote these learners. The entire education system is corrupt and these teachers are expected to administer, regulate and monitor a completely corrupt education system that doesn’t work,” said Matthews.

Grade 11 learner Felicia Lakay said: “They were very good teachers who were always there for us. We were about 40 learners in the classroom and they did the best that they could to make sure that all learners got the attention they needed.”

Yolanda Gelant, whose Grade-11 child was taught by Hendricks, said, “My son has been without a Maths teacher since 19 October and the department made no available help for our children … This is a critical time of the year because it is the final exams. I hope the outcome of this picket will be that the teachers will be reinstated.”

Hendricks and Jacobs were unavailable for comment. But Jacobs’ wife, Deidre, who was at the picket, told GroundUp: “We stay just down the road from the school and the learners know that any time that they need help they know where we are. My husband helped lots of learners, even with extra classes. He was a teacher at this school for more than ten years. The WCED doesn’t know these teachers or their worth. They don’t know what happened at this school. They just dismissed them.

WCED spokesperson Bronagh Hammond said the teachers were charged in terms of the Employment of Educators Act in that they committed an act of fraud by awarding fraudulent marks to Grade 11 learners for the November 2018 examination.

“The allegations were investigated and followed a legal process. They will not be reinstated. They acted dishonestly and we abide by the decision,” said Hammond.

“The principal has tried to find suitable replacements. No suitable candidates have been forthcoming for the posts. There are three maths teachers at the school who have been assisting with the classes. I must add that the average teacher learner ratio at this school is particularly low,” said Hammond.

John Ramsey High School principal Roshin Ramawoothar said, “The dismissal of my two educators is a sore point that is between the unions and the WCED. The school is cut out completely from the whole process. It’s in arbitration and CCMA at the moment.”