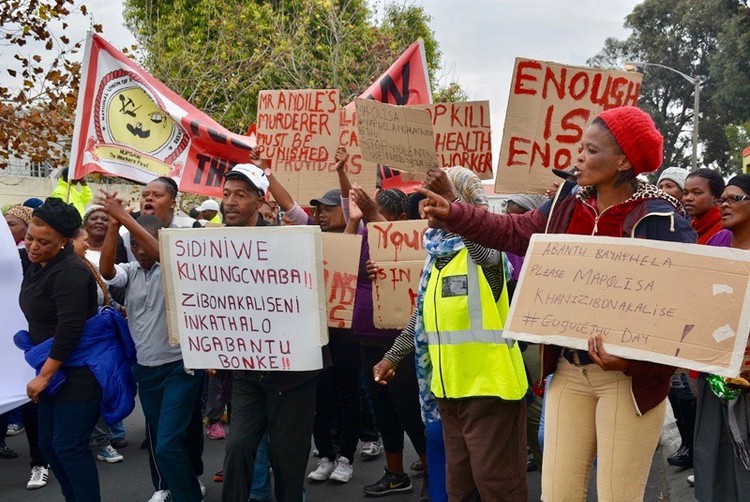 Workers from the local clinic together with community members march to Gugulethu police station to hand over a memorandum. Photo: Buziwe Nocuze

Protesters gathered outside the Gugulethu Community Health Centre at KTC Day Hospital on Wednesday in response to the murder of a health worker. Workers from the clinic together with community members then marched to Gugulethu police station to hand over a memorandum.

The event was organised by the Treatment Action Campaign (TAC).

This comes after a porter, Andile Magama, died after he was stabbed on his way home outside the clinic.

Ncediswa Ngcobondwana, an activist with the TAC, told the crowd, “You know this is not the first time that something like this happened. Now, we are afraid, and we want help from the police and also from the community.”

“We are not feeling safe so we want the visibility of the police next to the clinic everyday. If that can happen, we believe incidents like these won’t happen again,” she said.

Resident Thembile Makana said, “How many people do we want to see dead before we report these criminals? Why are we hiding them while we can identify them? Let’s unite and fight these criminals.”

The memorandum was received by the Deputy Minister of Police Bongani Mkongi at Gugulethu police station who promised that by next week there would be a mobile station at the clinic.