This is probably the list of artworks UCT has removed

University claims there are errors in our list that we obtained from a reliable source, but refuses to provide corrections 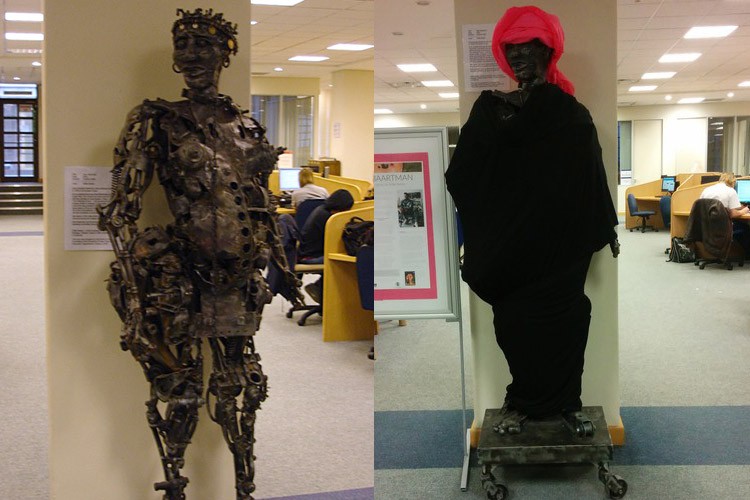 Following a long deliberation process, the Artworks Task Team (ATT) of the University of Cape Town (UCT) published a report in February that indicates the pieces of art removed and covered up in the past year will remain off the walls indefinitely.

The report appears to refer to a list of 75 pieces of works that were removed, the names of which GroundUp has received from a confidential source (list included at the bottom of this article) as well as 19 pieces of art determined to be controversial by student representatives on the ATT in 2015. The two lists, which most probably overlap with regards to certain pieces of art, in combination with the 23 works that were destroyed during the Shackville protests in February 2016, leave a gaping hole in UCT’s sizable collection of artwork as almost 100 pieces will be collecting dust in a storage closet for the foreseeable future.

In response to GroundUp’s request for confirmation of the below list of 75 removed works, UCT said that, “the list of the 75 artworks provided by GroundUp is not entirely correct.” However, the university has refused to reveal the titles of the works that are incorrect.

The ATT was started in September 2015 to advise the university’s Works of Art Committee on policy for statues, plaques, and artworks.

In response to criticism of the Task Team in the media, the ATT responded with a “clarification” of its role, distinguishing itself from the Works of Art Committee whom it said is “the body responsible for the development of policy for artworks.”

In the February 2017 report, the ATT published a list of “short- and medium- to long-term recommendations [that] were developed based on the outcomes of the audit of artworks, statues and plaques.” The first short term recommendation, to be implemented in one year, states:

“The University of Cape Town must keep artworks that were removed from the walls in storage pending a broader consultative process. This consultation may take the form of displays of some of the contested artworks, (in dedicated spaces such as the CAS Gallery), debates and discussions around specific artworks and/or themes. Seminars that may involve artists of ‘contested’ works may also be hosted by the WOAC and other departments in the university around different artworks and symbols.”

It is not clear if this “consultative process” has a time limit for how long the art will be kept in storage.

The report makes it apparent that some of the works were removed for safety reasons while others were removed for political reasons as “part of the transformation agenda” and calls on the Works of Art Committee to make clear the reason for removal.

“The Task Team [ATT] organised a joint meeting with the Works of Art Committee where it supported this initiative but advised that the motives for the removals should be made clear. For example, there needed to be public communication about whether the removals were only a measure for securing assets or if they were part of the transformation agenda. The lack of public communication by the Works of Art Committee incited widespread public speculation that removals amounted to censorship by the [ATT].”

One of the conclusions reached by the team discusses that although “there may not be a problem with individual artworks,” the overall effect of many works creates an unsafe, uncomfortable environment for certain people on campus.

“In our deliberations we found that while there may not be a problem with individual artworks, their cumulative effect, coupled with the lack of a considered curatorial policy, creates a negative feeling amongst some students and staff. We found that currently, UCT does not have a curatorial policy and would need to develop one that is transformation sensitive.”

Artists of the removed and covered works, including Diane Victor, Edward Tsumele, and Breyten Breytenbach, have publicly spoken out against UCT’s supposed transformation process, which the aforementioned artists regard as censorship.

In an interview with LitNet in April 2016, Tsumele said: “It is 100% a case of censorship, ironically in a democracy whose constitution allows for freedom of expression such as through art.”

When asked if South African art that is influenced from overseas trends can be viewed as a form of colonialism or neo- colonialism, Tsumele said, “Society should not attempt to dictate who should influence artists.” Further, “There should never be dictatorship with regard to how artists represent the human condition in their works; whether we agree or do not agree with such representation, it is none of our business as society.”

The report confirms the list of 19 works that were singled out by students on the team, though it does not name the pieces. In response to a query from GroundUp regarding the works, Elijah Moholola, Head Media Liason for UCT said, “[the works] were identified as part of the plan of the ATT to initiate discussions and debates around the contested artworks but such plans were affected by the protest action in February 2016.”

“The initial student representatives on the Task Team identified a list of 19 works in 2015 that were deemed to be controversial. Before recommendations could be made, however, the #FeesMustFall protests began, resulting in the closure of the University.”

It goes on to discuss the paintings that were destroyed during protests, without naming them:

“On 16 February 2016, twenty-three artworks were destroyed on Upper Campus during the Shackville Protests.”

A 2014 article criticising the over- representation of black bodies in negative and often degrading positions in artwork displayed across campus refers to a number of paintings and sculptures, including Willie Bester’s Saartjie Baartman and Diane Victor’s Pasiphae. Many of these were removed or covered up. These two artists are not on the list of 75 that GroundUp received, leading us to believe that the list of 75 is mostly separate from the 19 works. However, the reference to the “portrait of a naked white man, on his lap is a black woman” identifies Breytenbach’s Hovering Dog, which is, in fact, on the list of 75 artworks we received. This indicates that though UCT has said the 19 works identified were not removed because of protest disruption, works identified as part of the list of 19 may also be part of the 75 works that were indeed removed.

In response to GroundUp’s question of whether or not the removal of these pieces of art goes against UCT’s ideals of freedom of expression, the university responded: “UCT continues to uphold freedom of expression as enshrined in the South African Constitution. The removal of the artworks is only a temporary measure while there is ongoing dialogue and debates over creating an institution that is inclusive and reflective of the diversity of the country.”