“What I’m telling the court today is what happened” 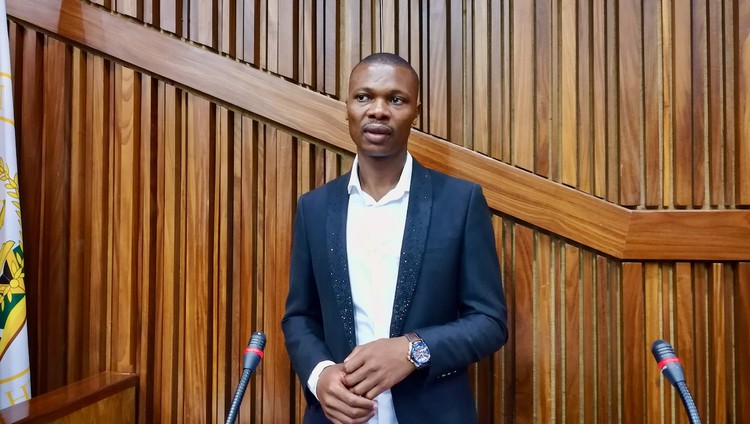 Mthokozisi Sithole, one of five inmates suing the Minister of Justice and Correctional Services for alleged assault and torture, was cross-examined in the Johannesburg High Court on Wednesday. Photo: Zoë Postman

Dragged into an office, beaten and given shocks. According to Mthokozisi Sithole this is what prison officials did to him at Leeuwkop Maximum Correctional Centre because they suspected he had a mobile phone in his cell.

Sithole was being cross-examined in the Johannesburg High Court on Wednesday.

Sithole is one of five inmates suing the Minister of Justice and Correctional Services, alleging assault and torture.

In testimony on Monday he had recalled that on 10 August 2014 another inmate in his cell, Xolani Zulu, in a protest against collective punishment, jammed their cell door to prevent prison officials entering. Zulu had complained about the collective punishment but had received no reply from officials.

On Tuesday, Sithole told the court that all the inmates in the cell had held a meeting the night before the incident. He said they did not understand why they were being punished collectively.

The next morning, after the prison officials called a locksmith to open the jammed door, members of the Emergency Security Team (EST) arrived and he was hit with a baton as he exited the cell.

Sithole said his name was then called from a list of people suspected of possessing mobile phones. An official slapped him and dragged him to an office. Some of the other plaintiffs were there already. He was beaten and given shocks. An official stepped on the prisoners’ necks when they were lying on the floor.

During cross-examination, Advocate Marumo Moerane for the Minister of Justice and Correctional Services said the version that prison officials stepped on Sithole’s neck and assaulted him was a fabrication by Sithole and Zulu.

He said that after the alleged incident Sithole had not told the health professional examining him about any neck injury nor had he mentioned it in his statement.

“I put it to you Mr Sithole that you did not tell a soul … and that it is completely untrue. If you had reported this to Dr [Sindisiwe] Van Zyl, she would have recorded it,” said Moerane.

Sithole said he had told Van Zyl that he had some pain in his neck. He did not know why it was not recorded.

“What I’m telling the court today is what happened,” he said.

Moerane then put it to Sithole that the official, who he had said assaulted him, had not been in the office that day.

Sithole replied that this was untrue.

The court case continues on Thursday. Judge Ellem Jacob Francis is presiding and the plaintiffs are represented by Lawyers for Human Rights.