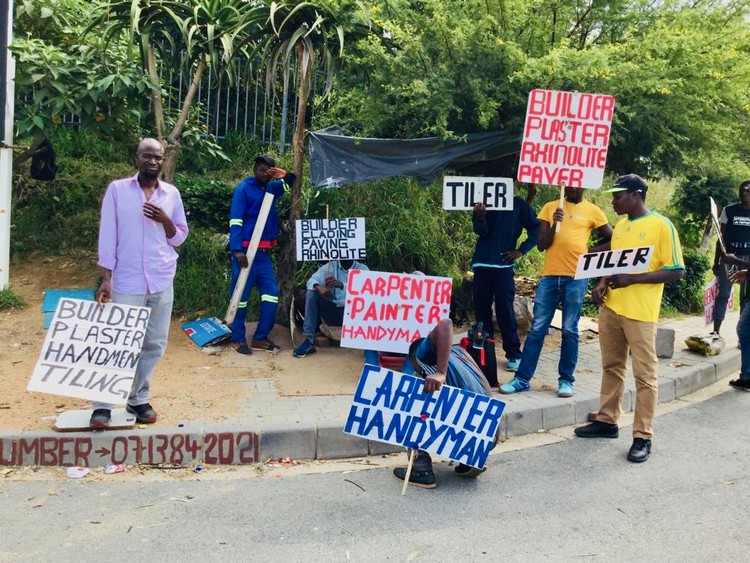 Men standing outside the Builders Warehouse in Northriding, hoping to get casual work. Photo: Kimberly Mutandiro

Street corners and shopping complexes in the uptown commercial and residential areas of Johannesburg’s northern suburbs, such as Sandton, have become hubs for immigrant job seekers from Gauteng’s townships.

Immigrants from Lesotho, Malawi and Zimbabwe and some from Mozambique make up most of the people trying their luck. From the early hours, people can be seen waiting for job offers from drivers passing by. Popular spots are the corner of Pritchard and Post Office streets in Northriding, Fourways Builders’ Warehouse and Decor Park in Randburg.

They wait sometimes for weeks before they find work. They constantly dodge police patrols, and some find that after they have done the job, they are not paid. But they do not give up.

Narciso Gavissi from Matupo lives at Car Sale informal settlement near Randburg. He hangs out at a traffic circle at William Nicol and Witkoppen streets.

“One day someone will feel for me and give me a job. I cannot go back to Mozambique now for l will have failed my family back home,” he says.

Job seekers told GroundUp they can go for three or four weeks without finding any work.

Security officers at Fourways Builders Warehouse at the corner of Sunset Boulevard and Sunrise streets say at least 50 people, mostly men, stand outside the shop to find work. Some men hold placards advertising their skills. They also carry bags with their tools. They are carpenters, pavers, plumbers, electricians, DSTV installers, and handymen. Some have had their tools confiscated by the police.

“Sometimes the situation gets ugly because up to 20 people can surround a car demanding work from customers who come to the shop. Often police are called to help clear the people, but they still come back,” says Steven Koegelenberg, ISMS Security Supervisor for the parking area at the shopping complex.

Lisbet Nyambuzi from Diepsloot has four unemployed children and one grandchild who depend on her. Since the beginning of the year she has only found two days of domestic work and earned R600.

She said when the police come, she and a group of women move away but immediately return.

“Police will not get rid of us that easy, this is like a battlefield. We will fight to look after our children,” says Samantha Mleya from Makokoba in Zimbabwe. She has been looking for work for over two and a half years.

“The bad economic situation in our country does not allow us to stay there. We came to Egoli to look for money. It will not help me to stay at home. l have to come to this spot because it is my only hope to find work.”

Mleya says some employees have refused to pay her after picking her up to clean in their homes.

“We live a difficult life here in South Africa. I came to find greener pastures, instead life is getting harder every day. But it is better than living in Zimbabwe because with a rand l can buy a snack and eat. In Zimbabwe things are expensive.”

Thandiwe Nyathi from Bulawayo says she has been trying to get paid for work she did in January at a nearby housing complex. She said security officers at the complex now laugh when they see her.

Georgina Manda from Zomba in Malawi said she is lucky. “l have regular employers who pick me up from here,” she says. She sends money to her mother in Malawi who is looking after her child.

Most of the men who stand at the gate of Builders Warehouse are from Zimbabwe. Wisdom Mbowani, originally from Masvingo, said he has been in South Africa for over 17 years and has landed some big contracts meeting people at the warehouse.

“These are like our offices; we get our customers here, “ he says.

“I make a decent amount of money on a monthly basis and l am able to look after my family. The only thing that would make me go back to Zimbabwe would be a change of government because things are not right.”