Sinazo Kleinbooi, 14, was shot and killed on her way home from school 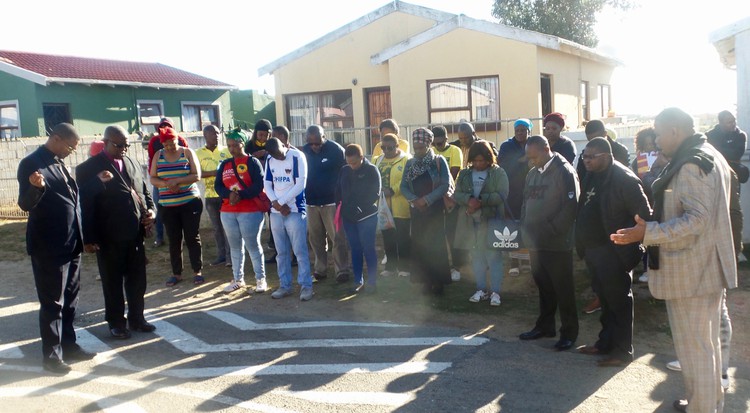 A prayer meeting was held for Sinazo Kleinbooi who was shot and killed in Motherwell, Port Elizabeth. Photo: Joseph Chirume

About thirty people in Port Elizabeth held a prayer meeting on Thursday at the site where Sinazo Kleinbooi was shot and killed on 30 July.

She was shot in Kwamanube Street, Motherwell, Port Elizabeth, ten days before her 15th birthday.

A grade 9 student at Happyhome Academy, Sinazo was on her way home from school. She was in school uniform when she was shot.

Her mother, Bongi Kleinbooi, said, “It is very painful that no one knows why she was killed and no arrests have been made.”

Eastern Cape Provincial Youth Board Chairperson Lunga Minyayo said Sinazo was killed in broad daylight on a busy street, yet no one had come forward. “Police alone cannot clean our streets of criminals without the assistance of communities,” said Minyayo.

Reverend Zola Moses of the Motherwell Ministers’ Fraternity said, “The government should clamp down on illegal guns that are fuelling crime.”

Police spokesperson Captain Andre Beetge said, “No arrests have been made yet and police are still looking for the killers.”