PRASA official ‘declines’ to go on air with #UniteBehind

Demand that #UniteBehind not be allowed to participate on the same programme is a direct form of censorship, says organisation 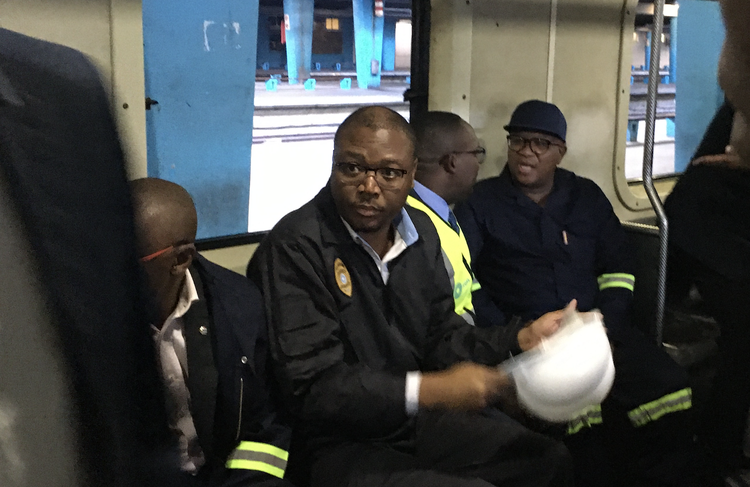 The Passenger Rail Agency of South Africa (PRASA) and #UniteBehind’s Zackie Achmat were expected to participate in a robust debate on Radio 702’s Eusebius McKaiser show on Tuesday morning. But hours before Achmat was to be interviewed on the ailing railway services, particularly in Cape Town, PRASA refused to have its administrator participate in the interview.

Producer for McKaiser’s mid-morning show, Laura Wener, said PRASA administrator Bongisizwe Mpondo and Achmat had been booked to appear on the show, but PRASA threatened to pull out when she told them Achmat would be present. “They said they won’t be able to do the interview,” said Wener.

She said PRASA indicated “The Minister” [Minister of Transport Fikile Mbalula] would need to be on the show to answer the questions #UniteBehind would ask. However, Wener said, Radio 702 were still able to hold Mpondo accountable. Talk show host Eusebius McKaiser referred questions to the show’s producer.

Achmat told GroundUp that he received an SMS from Wener who “in the interests of transparency” told him his presence on the show had been cancelled due to PRASA threatening to pull out when they heard #UniteBehind would participate in the on air discussion.

Achmat said he understood Radio 702’s dilemma, but added that acceding to PRASA’s demands was a slippery slope. “The media is critical to ensuring any government official who has to account to the public does so in the presence of someone who critiques what they say,” said Achmat.

“If the media gives in to every single request to not have a critical person on the platform with them, then they are effectively shutting down critique. This creates a climate of impunity,” he said.

In a statement issued after McKaiser’s interview with Mpondo, #UniteBehind said that Mpondo and PRASA “showed deep contempt for accountability and openness regarding a state-owned entity that should serve working people who use trains across all the major cities in our country”.

It added that the public roadshows by PRASA did not remedy this “disregard for accountability” as they were “controlled information sessions”.

#UniteBehind said that PRASA and Mpondo should welcome discussion and criticism. “Mr Mpondo’s demand that #UniteBehind not be allowed to participate on the same programme is a direct form of censorship”, adding it was “deeply regrettable” that the talk show had given in to the demand.

PRASA spokesperson Makhosini Mgitywa said he had received the invitation for Mpondo to appear on the show and was told Achmat would also be present to talk about the ongoing case challenging Mpondo’s appointment. “I told the producer that we would have to decline because as PRASA we are not talking about that. Only the appointing authority, the Ministry or Department, can talk about that,” stated Mgitywa.

He said PRASA regarded #UniteBehind as “an important stakeholder in the environment PRASA operates in, especially in the Western Cape” and added that they “would be keen to engage with them on issues that affect PRASA and the commuter rail transport system generally”.

#UniteBehind has been involved in extensive efforts to hold PRASA to account. As a result of continued legal action, the Cape High Court recently issued an order against PRASA demanding it pay security companies it fired in November last year, and explain why it failed to produce a security plan last December as ordered to do so by Judge John Hlope on 19 November last year.