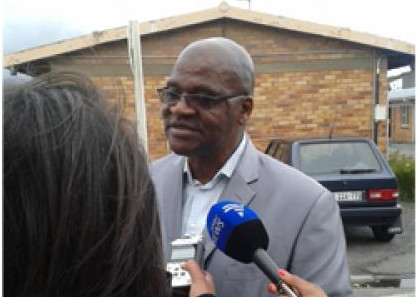 Mthuthuzeli Swartz gives a media interview in 2014 in which he describes Metrorail’s plan to improve train services in the Western Cape. Archive photo: Mary-Anne Gontsana.

The Passenger Rail Agency of South Africa (PRASA) has appointed an acting CEO of Rail who is under investigation for corruption and sexual harassment. This has been revealed in a letter sent on 5 January by the UniteBehind Coalition to the chairperson of the PRASA interim Board, Justice Makhubele. UniteBehind has given the board until Thursday (today) to suspend Mthuthuzeli Swartz.

UniteBehind said PRASA had decided to promote Swartz to acting CEO on 3 January, ignoring legal advice given at the end of December 2017 that he should be suspended.

UniteBehind listed several reasons why Swartz should be fired immediately. It also demanded that he be forced to account for his actions.

GroundUp approached PRASA to comment on all the allegations described in the letter. PRASA spokesperson Nana Zenani said the agency had no comment. Sipho Sithole, head of communications at PRASA, had also not responded to questions by the time of publication.

Should the PRASA Board decide not to suspend Swartz, UniteBehind said it should give legally valid reasons for this by the close of business on Thursday.