Power struggle between ANC and EFF in Brakpan turns violent 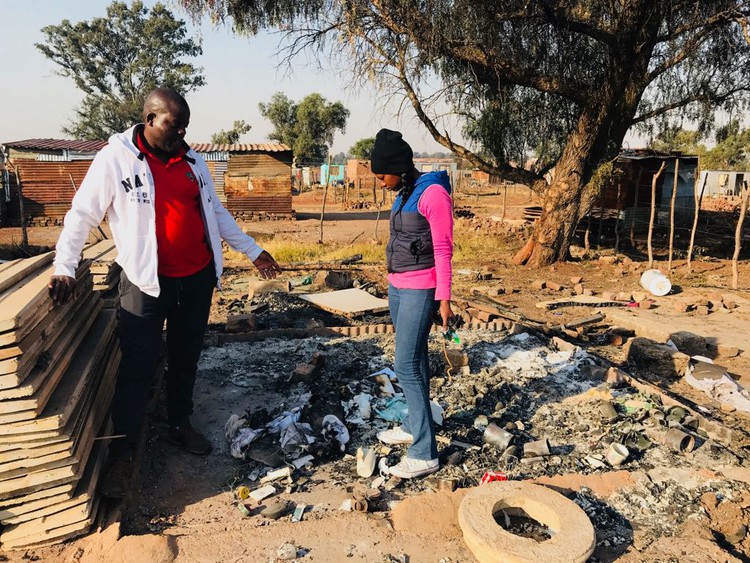 Fights between EFF and ANC members broke out in the Old Brakpan location last week. A meeting at Brakpan police station attempted to find a solution to the escalating tension.

GroundUp has previously reported that the EFF has been registering people and then allocating them land to occupy in Brakpan. Thousands of people registered.

The DA councillor for the area, Brandon Pretorius, opposed the occupation on the grounds that it is unlawful. Metro Police have on several occasions destroyed shacks erected through the EFF land allocations.

Residents who have witnessed the fights said they are a consequence of ANC members in the community feeling threatened that the EFF will gain more supporters through the land occupation scheme. But the situation is more complicated than this.

ANC members in the Old Brakpan location have denied the allegations saying they are not acting in their political capacity, but as residents. (They asked for their names not to be published.)

Also, some residents occupied land before the EFF got involved, and are opposed to the EFF’s role in the occupations.

“We are suffering because of infighting between EFF and ANC in the informal settlement. It’s a battle for power and we are caught up in the middle,” said Ice Izingozo. He has been living at the informal settlement for two years. He says that throughout that period none of the promises made by either the EFF or the ANC have borne fruit.

He says the EFF’s land registration scheme is upsetting a court agreement that, according to Isingozo, restricts further occupations at the Old Brakpan location, pending the finalization of a court case that the original occupiers had brought.

On Wednesday some shacks belonging to new occupiers who had rebuilt after Metro police had demolished them were reportedly burnt by community members.

Witnesses said that a few days ago angry community members also destroyed a shack that EFF members were using as an office, together with shacks belonging to EFF ward 97 chairperson Sesi Ndlovu and her mother-in-law. Another shack belonging to another EFF member was slightly damaged.

“When l saw the mob of people chanting around our secretary’s shack, l had a feeling they might come after me too,” said Kedibong Selowa, an EFF member who had been living in the area.

Selowa said people were holding weapons and petrol bombs. A man suspected by the community to be affiliated with the EFF was attacked, she says.

After witnessing the secretary’s shack being set ablaze from a distance, she says she decided to flee before they reached her shack. “l ran for my life and later on they got to my shack, but did not do much damage seeing that l had fled.”

A few days later a shack belonging to an ANC member in the informal settlement was burnt by unknown assailants.

“ANC members living in the area have been influencing community members. They want to turn the land allocation to their advantage. The ANC knows that people are rejecting them and has run out of strategies,” said EFF’s deputy chairperson for Ekhurhuleni Mandla Moloko.

Moloko says the EFF is currently negotiating with community members and the police to help Ndlovu and other EFF members return to the informal settlement.

Meanwhile Pretorius (the ward councillor) says the community uprising had been coming. “The EFF has been playing desperate games by intimidating people at the Old Brakpan location to gain momentum. The community has realised that the behaviour of the EFF is chaotic and can ruin their only chances to get the land developed.”

Pretorius also said the EFF had disturbed a meeting on Sunday which he had intended to address the Old Brakpan location community.