The workers say they have not received a wage hike in three years. They are demanding a 12% wage increase 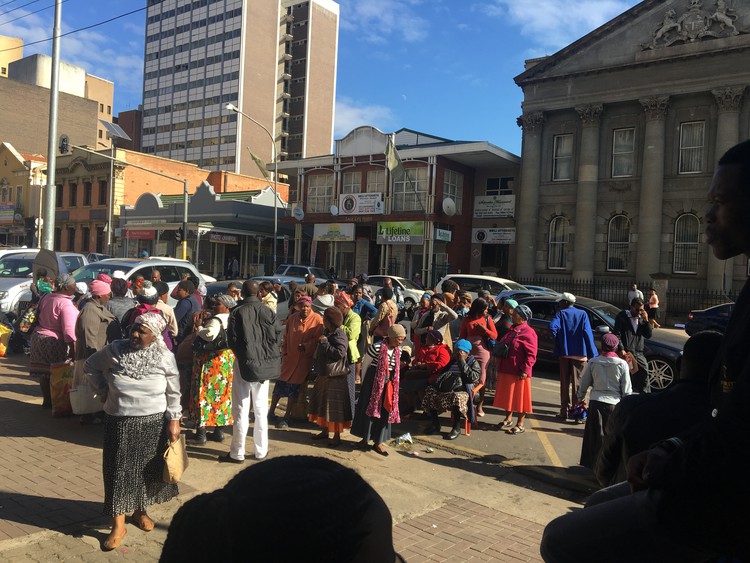 A group of mostly pensioners waited for hours outside the post office in Langalibalele Street, Pietermaritzburg where the doors remained closed on Friday as workers are on strike. Photo: Nompendulo Ngubane

Thousands of workers at the South African Post Office and Telkom downed tools on 6 July to demand higher wages. They are affiliated to the Communication Workers Union, Customs Union and the Democratic Postal and Communications Union.

They are demanding a 12% increase but the Post Office insists it can only afford an across the board salary increase of 6% from 1 August to all employees.

The strike left hundreds of social grant beneficiaries stranded. In Pietermaritzburg, beneficiaries were seen standing in snaking lines outside the post office in Langalibalele Street.

Nomzamo Khuse from Sweetwater had been standing in line since 5am. “When we came the doors were closed. The employees told us they cannot help us. They said they have embarked on a strike. It’s clear that we will go home without being paid.”

A post office employee who asked not to be named said that staff became upset because they had not received a pay increase in three years. “There is an overload of work. We work overtime but we are not paid well. The work is strenuous since we are working with the beneficiaries. We open at 5am and go home at 8:30pm. It’s more work but less money.”

Another post office employee, Jabulani Mtungwa said, “We now service many people. That is a challenge. They need to improve the systems. They make working very difficult. We love our jobs but there are challenges. Look at these people (beneficiaries), they are frustrated and angry. Unfortunately we cannot help them unless our issues are attended to.”

In a statement on 6 July, the Post Office urged beneficiaries affected by the strike to withdraw their grants at ATMs and other retail stores. The Post Office will be returning to the Commission for Conciliation Mediation and Arbitration (CCMA) with union representatives on Monday.

The strike by Post Office employees is expected to continue this week, says provincial secretary of the Communication Workers Union, Thami Mzileni. On Sunday Mzileni told GroundUp that workers were planning to “shut down the CBD” on 13 July. He said MTN employees were also expected to join the action this week.

It comes as SASSA employees affiliated to the Public Servants’ Association (PSA) are expected to head back to the negotiation table with the agency after downing tools for nearly a month. They are opposed to the 7% pay hike agreement made with other unions. PSA members are demanding salary increases of up to 13%.

The South African Social Security Agency (SASSA) again came under fire on 2 July when “a technical glitch” resulted in nearly 800,000 grant recipients not getting paid. These beneficiaries were among nearly 1.5 million people who have the new social grant cards distributed by the Post Office.

The state agencies assured grant recipients that the issue was resolved. The Post Office took over the contract from Cash Paymaster Services to distribute social grants (excluding cash grants) on behalf of the agency in April.