Our cities show disdain for the poor 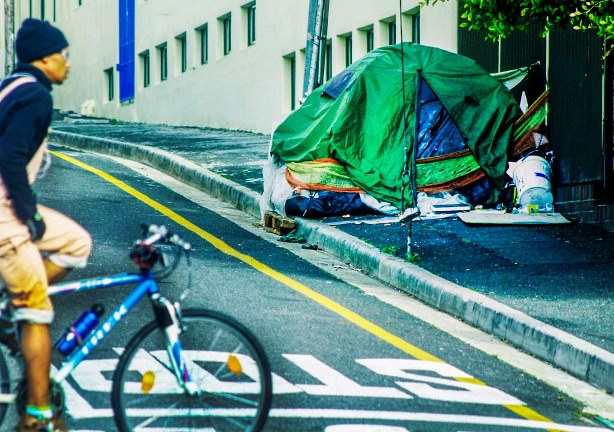 Homeless people in our cities are “erased” from the streets, says the author. Photo: Masixole Feni

For some of us, streets are merely routes between one place and another. For others, streets are places in which to survive. Yet our cities deny the poor access to public space.

For some, a bench in a park is a place from where to watch one’s kids play or take a smoke break. For a mother whose children are tired from the long walk home, it can be a place where they can put up their feet. For a homeless person, though, a bench in a public space can make a difference between having a place to sleep at night or not.

Rapule*, a young man often seen in Braamfontein, Johannesburg, says bus shelters “become a home a night, a place where I can keep dry in the rain”. His preferred bus stop is the one in front of the Orion Building in Jorissen Street because there are lights there and security guards at night, which also makes him feel much safer.

Shared public spaces hold different meanings for the people occupying them and also have the power to break down many walls between us.

Former Bogotá mayor, Enrique Peñalosa, has noted that public spaces “are just as important as hospitals and schools. They create a sense of belonging. This creates a different type of society. A society where people of all income levels meet in public spaces is a more integrated, socially healthier one.”

In the Central Improvement District (CID) of Observatory, Cape Town which is a Special Ratings Area, residents are compelled to pay extra rates in return for increased security and “clean streets”. But the “cleanliness” they get apparently involves the removal of poor, Black people from the streets.

This involves both visible and invisible erasure. Parks are locked at night to ‘keep off the riff raff’ and the private security company initially contracted to do to do the “cleaning” has been accused of a variety of abuses.

Since 2010, homeless people in the area have claimed that security guards have been demanding money from them for “permission” to sleep in doorways and under the bridge. Amounts of R10 per “incident” have been mentioned. There have also been allegations of the homeless being forcibly relocated, some to Mitchell’s Plain and Paarl, some as far away as Ceres and Malmesbury where they are dropped without resources.

A group of four residents has been fighting this, with the stories documented by a homeless rights advocate. Brian Amery, the then Chief Operating Officer of the district, has refuted the allegations though witnesses to the incidents are willing to make sworn statements.

Amery has confirmed that the guards stop and search people with a wheelie bin, to confirm that they do not have stolen goods. “This is not as form of harassment, but merely crime prevention,” he says.

Another security company was contracted in 2012, but not much changed. Minutes from a “dialogue on issues related to homeless persons’ rights” hosted in 2013 showed that the problems continued. Many residents in the area support the actions of the security company and have threatened those who have taken up the matter. And though the concerned residents have approached the City of Cape Town, little has been done. In December I tweeted the City about the matter and was told to “contact the management of the company directly”.

The City of Cape Town is not unique in this regard: across South Africa’s cities public spaces have become a battle between the private and public, with poor Black people being the biggest casualties.

Who can forget the City of Johannesburg’s now infamous “Operation Clean Sweep” and the more recent Operation “Ke Molao” ? In Pietermaritzburg, there are reportedly plans to shoot waste pickers with pellet guns as a security measure. In eThekwini, a by-law that could have people caught urinating in public fined up to R40 000 - which would disproportionately affect the homeless - has apparently been put into place.

All these actions reveal a disdain for the poor, a means through which it is constantly reinforced to Black, poor people that “you are not part of the ‘public’ and should thus be made invisible”. Much of this, with support from some members of the public, has been done in the name of “crime prevention”.

We also see this trend in the rise of gated communities and boom-gates in cities, along with the “informal apartheid” brought on by various resident associations and neighbourhood watch groups.

Cities are prioritising commercial interests over social value, trying to outdo each other on various “best city” lists and becoming the host city of choice for various events in order to attract capital. At the same time, the trend is fuelled by racism and prejudice, with the presence of some people perceived to lead to criminality and a lowering of property value.

As a result, the historically privileged and the new elites enjoy the best access to public space. Under apartheid, Black people were historically denied access to parts of our cities; in the democratic dispensation poor people, who remain predominantly Black, are still being denied this access.

Beyond that, cities that are unwelcoming for some become unwelcoming for all, as they help keep in place the divisions between us. And this creates hostility and unhealthy social relationships for everyone within city boundaries. It is this that makes cities and the shared spaces within them an important site of struggle.

Political life must be given to the urban agenda, in a way that places social considerations first to ensure that Black, poor lives are valued within the confines of the city, with shared spaces built and used in equitable, nurturing ways. And this is not something just the state can or should be doing. It involves us as a society challenging ourselves, both individually and collectively, about the values which guide our ideas and practices about public space.

*He did not want his full name published

Koketso Moeti isExecutive Director of amandla.mobi and the National Coordinator of Local Government Action. She has a long background in civic activism and has over the years worked at the intersection of governance, communication and citizen action. Also on Twitter at @Kmoeti. Views expressed are not necessarily those of GroundUp.