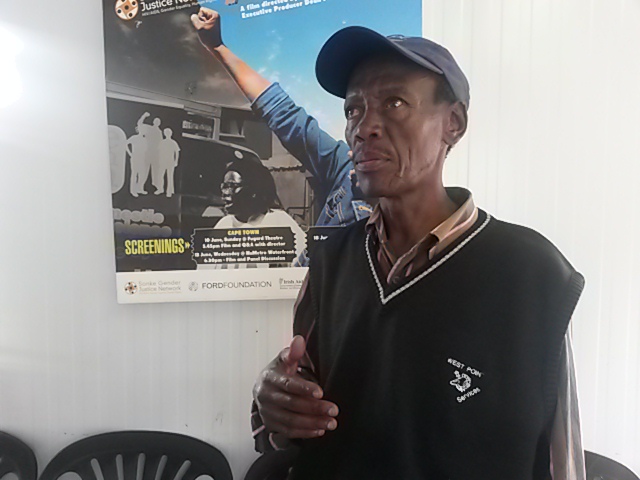 During his four months in the remand section at Pollsmoor Prison last year, Mvelisi Sitokisi was not only forced to default on his antiretroviral (ARV) medication, but also contracted tuberculosis (TB).

“I suffered inside those cells. My mattress was dirty and because I wasn’t a gangster, I couldn’t go up to the wardens to ask for help. If you did that, then they would beat you up,” Sitokisi said.

The 38-year-old Gugulethu resident was charged with rape in April last year. He was released after four months in prison when charges against him were withdrawn following the release of DNA evidence.

Sitokisi is one of eight current and former detainees as well as a few staff members who are deponents in the matter against the Department of Correctional Services.

In December last year, Sonke Gender Justice and Lawyers for Human Rights launched an application in the Western Cape High Court, challenging the “deplorable” conditions for staff and detainees inside the facility.

Sitokisi said that despite informing the prison of his HIV status, he was never taken to the clinic or allowed to get his medication from his family.

“When I got to Pollsmoor I informed them that I was HIV-positive and needed to take my medication which is the one tablet treatment. When my family brought my medication to prison, they were told the prison would give me treatment.

“I was told that I would be seen by a doctor who would give me medication. Whenever I asked when I was going to be taken to hospital to get my ARVs, I was told there wasn’t transport,” he said.

Sitokisi said he often slept on the floor and shared confined spaces with inmates who had TB.

“I contracted TB in there because we were mixed with the guys who were infected. I also had a light stroke in the first month. They just kept telling me I must wait to go to the clinic,” he said.

“When I was finally released, I went to the clinic and I was diagnosed with TB. The doctor told me that I had to go for more blood tests and start a new course of ARV treatment. I tried to explain to them that it wasn’t my fault,” he said.

Sitokisi said he had completed his TB treatment, but his health had deteriorated since his incarceration.

Athekosi Myoli of Gugulethu, who spent three and a half months in the remand section in 2009, described the foul smell and overcrowding in the cells.

“I was 24 at the time and it was my first time in jail. We split into two cells, one with gangsters and the other with non-gangsters, but we got mixed up anyway,” he said.

“My first night was hard. I was lucky enough to get a sheet and a blanket that I put on the floor to sleep on. When I got my blanket it was already very dirty and I couldn’t wash it because it was winter and that meant I wouldn’t have anything to sleep on. There were people smoking in the cell and gambling. No one came to check up on us,” he said.

Myoli said he shared a small cell meant for 24 people with about 50 other inmates.

“We all shared a toilet and a shower that was blocked regularly. We would have to use the sink, but that meant we needed to wash in turns every week or so. The gang members always went first to get the hot water, so by the time it was my turn, the water was cold,” he said.

Myoli said he remained traumatised by his experience in Pollsmoor.

“The day I came out of jail, I went to the clinic to get tested. I’m not the same person anymore,” he said.

Sonke trainer at Pollsmoor Mzamo Sidelo, who worked in the remand section between 2009 and 2013, said he often feared for his health.

“I conducted health and particularly gender based violence awareness talks in the remand cells. I would go cell to cell and do my one hour talks. I enjoyed working there, but I constantly felt my health was at risk,” he said.

“There were too many people in one cell. When you walk in, some people are sleeping, others are sitting around, some are playing card games. The smell was also very bad,” he said.

Sidelo said he was moved from the remand centre after filing a complaint about the conditions.

“When we started working there, we got masks to prevent us from getting TB. However, none of the detainees had masks, so I didn’t wear one because you can’t talk and interact with a mask on,” he said.

“The issue of TB affects everyone, including the staff. It’s not just a problem affecting inmates,” he said.

Sidelo said better training was needed to ensure the safety of both the staff and detainees.

“The staff need more training in order to protect themselves because they spend the most time there.