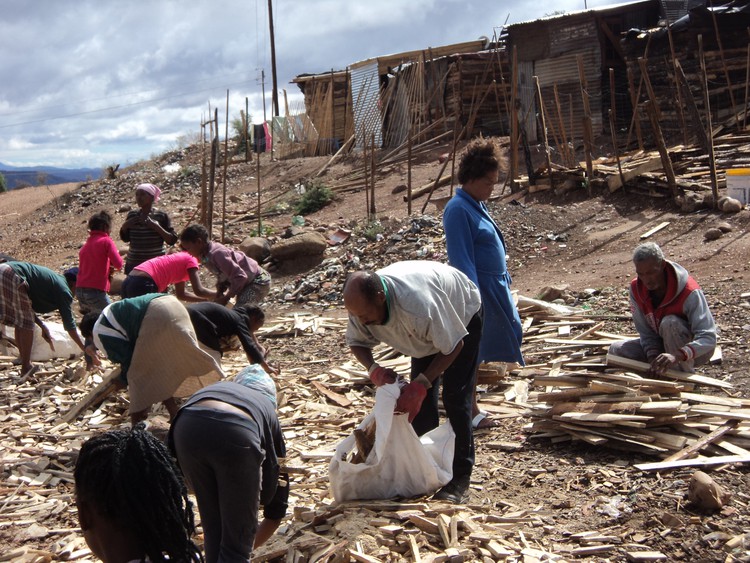 Residents of Black Joint and G.G Camp informal settlements outside Oudtshoorn make daily trips to collect wood from bushes some distance away to cook and stay warm. Photo: Mpumi Kiva

Residents of Black Joint and G.G Camp informal settlements outside Oudtshoorn say they have no choice but to make daily trips to collect wood from bushes and a dumpsite a distance away.

The settlements have gone nearly two decades without electricity and proper ablution facilities despite repeated promises, they say. Most of the residents moved onto the council-owned land in 2001 after being evicted from nearby farms, while others were backyarders who could no longer afford rent. Most of the homes are made of wood and zinc sheets.

During rainy seasons, residents say, water leaks through the roofs and floods their shacks, causing serious damage to their furniture.

“lt’s a challenge every day,” says Beauty Fillies, 39. She lives in a two-room shack in Black Joint with her two children. “Using a candle is a nightmare for my 13-year-old daughter who is in grade 7. It’s dangerous because l have to guard that she doesn’t fall asleep [with the candle still burning],” she says.

“Elections are coming. We will see politicians coming to our areas and making so many promises and disappearing after the voting,” she says.

Community leader Geshwin April from G.G Camp says he has made several attempts to raise residents’ plight with the Greater Oudtshoorn municipality to no avail.

April says Oudtshoorn municipality had promised to install electricity services to G.G camp since the people moved onto the land. “Politicians come and make promises that are never fulfilled,” he says.

“We are faced with a daily struggle and no one seems to care about our plight. During winter the situation is even worse, especially for children. It is the right of every citizen to have electricity in their homes,” he says.

Greater Oudtshoorn Municipality spokesperson Ntobeko Mangqwengqwe said there was no funding to electrify the G.G Camp, Kannan and Black Joint areas. But, he said , “the municipality does have plans to develop the area from informal to formal homes. Construction could start late this year or early next year. Funding of R1.13 million has been provided by the Western Cape government.”

“Sanitation and water studies have been done, capacity of water, electricity and sanitation has been confirmed. The municipality has been engaging with the provincial government to assist with the possible purchase of some portions of privately-owned land in these areas.”

Until then, residents like Fillies will have to continue “collecting wood from the nearby bushes and dumpsite to make fire to cook for our families”.