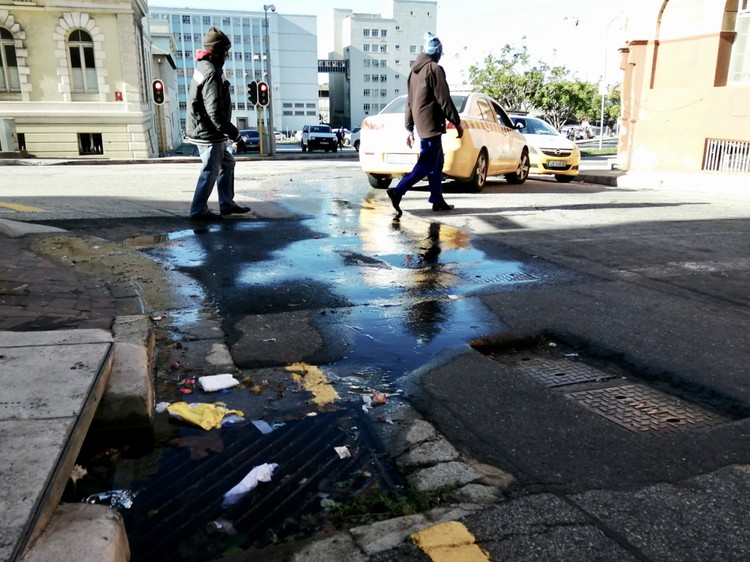 What looks like clean water has been running for weeks outside council chambers while the Nelson Mandela Metropolitan Municipality is under water restrictions. Photo: Thamsanqa Mbovane

What appears to be potable water has been rising out of a storm drain and running down the street at the Woolboard Exchange building on Military Road where the Nelson Mandela Bay Council chambers are, apparently for weeks.

“We see people dressed up in suits and driving posh cars every month. However, we don’t know where else to report this [leak] when the same people who should fix it are walking past it,” a student housed at a residence on the same street said.

Municipal spokesperson Mthubanzi Mniki said, “We are under water restrictions and therefore we will repair the pipe very soon. The Rapid Response Task Team coordinator Zonile Ndoni is on it. Fixing it is in the pipeline.”

However, after further enquiries by GroundUp, Mniki said the water looks drinkable but it is not. The problem is a blocked storm water drain. “Water is coming from different directions and causing flooding.”

“The problem is still there. All they do is to politicize everything,” Ward 43 Councillor Siphiwe Ntshiza (EFF) of KwaNobuhle, Uitenhage, told GroundUp during a 10-minute caucus break on Thursday.

“Before the council meeting of 30 May, the clean water was seeping slowly past the robots,” said Ntshiza. “Today [Thursday] it’s becoming worse. I mean we should practice what we preach by fixing it. None of us should turn a blind eye.”

Last Tuesday, Ntshiza posted pictures and a caption on Facebook about the leak: “If it’s like this in front of council chambers, how much it is worse in the township?”

Mayoral Committee Member for Public Health Yolisa Pali (ANC) responded: “So there should be no pipe burst outside council chambers or blockages, councillor?”

“Burst pipes happen everywhere councillor. Ours is to fix them quickly,” Pali added.

Mayoral Committee Member for Infrastructure and Engineering Andile Lungisa (ANC) said: “It will be sorted.”

After GroundUp published the story on Friday, the City’s stormwater workers arrived at the scene to fix the spillage.

Students at the residence popped their heads out of the upstairs windows. One told GroundUp, “We were unable to approach politicians who are always flanked by bodyguards.”

Mniki said, “The City has a challenge of old infrastructure but we are working hard to fix that.”