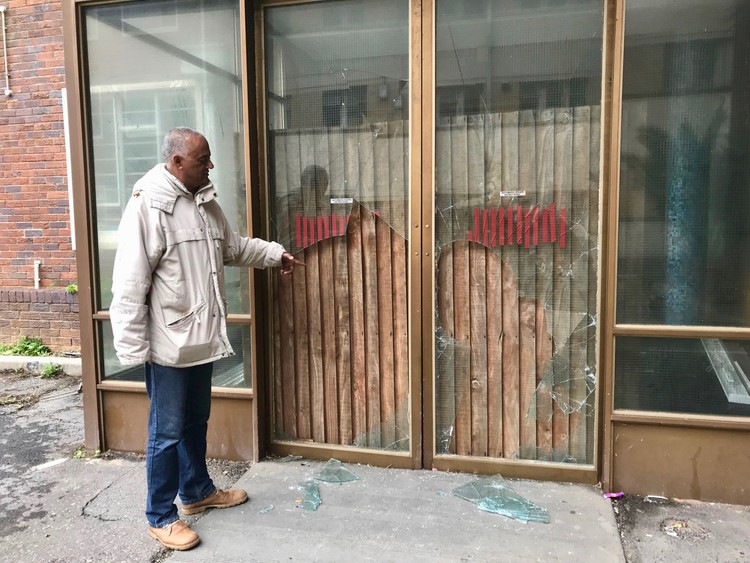 Bevil Lucas shows the door that police knocked down to gain entrance to the Woodstock Hospital building. Photo: Tariro Washinyira

Police raided Woodstock Hospital at about 2am on Thursday morning. They arrested about 40 people. All were released from Woodstock Police Station by Thursday afternoon without being charged.

According to residents the police were accompanied by soldiers from the SANDF and the City of Cape Town’s law enforcement, but GroundUp is unable to confirm this, because neither SAPS nor the City would provide detailed comment.

There are about 900 people living in Woodstock Hospital. The illegal occupation started in March 2017 and is led by housing activist group Reclaim the City. The residents have renamed the hospital Cissie Gool House, after the famous anti-apartheid activist.

Residents made several allegations about the raid, including that they asked for a warrant but were not shown one. They also accuse police of stealing from them, and forcing a disabled man to stand against a wall.

The City of Cape Town asked GroundUp to direct questions to SAPS as the lead agency on the operation.

But police spokesperson Lieutenant Colonel Andre Traut refused to answer our questions, saying that he could not do so before an investigation. He said complaints could be lodged with the management of Woodstock police station or with Independent Police Investigative Directorate (IPID).

Residents said that they have been raided several times, and that the police never find anything.

When we arrived at the scene in the morning children, who had missed school for the day, were standing outside. Some residents had taken off work to fix doors that were broken during the raid. They were also rearranging their furniture and packing their clothes which were strewn in every direction.

Ling said they expected to be raided because they had been warned at a public meeting last week. She accused the police of not treating the residents as humans. She said residents would have accommodated the police if they had “engaged” them.

A learner at a local high school described how the police were refused entrance by security guards. So they broke a lock, while others climbed over a fence to get into the hospital grounds. The learner said they entered their neighbour’s room and broke his furniture, cupboards and beds. When they found nothing they moved on to their house and “turned it upside down”.

“Standing up for my mother, I became rude and told them this is our place not theirs and we haven’t done anything wrong. We couldn’t go to school because we are tired. They have been here since 2am and only left after four,” he said.

A bedridden man, Jodie (surname withheld), said that police broke down his door and forced their way into his tiny room and told him to stand. But when he told them he can’t sit up or stand they made fun of him.

Mohamedy Ally, a Tanzanian refugee who has been living in South Africa since 2003, was released without any charge. He said that it was lucky the raid happened while his nine-year-old son and wife were visiting his mother-in-law. He said they stayed at the police station till 10am. “The captain said that we were waiting for immigration officers but they did not come. Then he released us,” he said.

Ally claimed that police took R150 from his jacket. He also claimed that at the station, they were separated into immigrants, blacks and coloureds. He claimed that some of those arrested were just wearing underwear and went to the police station like that without even a jacket. He alleged that a woman brought a jacket for her husband and the police said to her: “Hey just go away. Don’t make shit here.”

Mischka Everts told GroundUp that she was breastfeeding her baby when police knocked open her door. The door fell on her and injured her arm. She claims one of the officers said that she is living a luxurious life. She doesn’t pay for water and electricity while the officer stays in a small room and can’t afford beautiful and modern furniture like hers.

Shaking, as she spoke to GroundUp, another woman said the officers didn’t find anything. They took away immigrants and people with tattoos. She added that one of the officers rudely told her that police have a right to break down government property because they are government employees. “Instead of being there in Manenberg where they are more needed they are here terrorising innocent people,” she said.

Bevil Lucas, a Reclaim the City leader and resident, said that the manner in which the raids took place in the early morning was reminiscent of the way police behaved under apartheid.