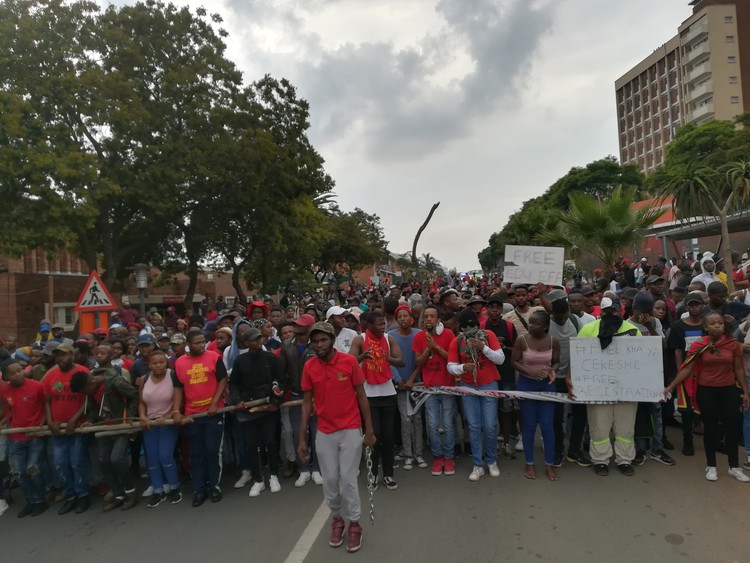 By Zoë Postman and Barbara Maregele

At least one person has been seriously injured during clashes between police and protesting students on Wednesday.

Students have been protesting at campuses across the country about similar issues. On Tuesday, students at Wits said they were going on hunger strike because of lack of accommodation and financial exclusions.

About 300 students from the University of Johannesburg (UJ), Wits and Central Johannesburg College marched from UJ’s Doornfontein to Auckland Park Kingsway (APK) campuses. As they entered campuses they called on other students to join them.

Two nyalas and several police and private security cars followed protesters closely as they marched through the streets.

The group, led by EFF student leaders, is calling for free registration, for students with historical debt to be allowed to register and for the National Student Financial Aid Scheme (NSFAS) to pay out accommodation funds.

Students were expected to hand over a memorandum to management at APK campus but a scuffle broke out between private security guards from SSG Security and the students at the gate. It is unclear what started the scuffle.

In a bid to disperse the group, police fired stun grenades. Several SSG security guards chased protesters down Kingsway Avenue, spraying pepper spray. Both guards and students threw stones at each other.

GroundUp saw a man who appeared to be badly injured with a blood-covered face. Paramedics were attending to him.

University spokesperson Herman Esterhuizen said the institution had implemented security measures for the safety of staff, other students and university property.

EFF student leader Phuti Chokwe said, “We warned them that we will be shutting down all UJ campuses today. At least 40% of returning students have been blocked from registering because of outstanding funds. We also have students that have not been able to register because UJ has a first come, first serve policy. Our students at Braamfontein also don’t have accommodation because there was an issue with NSFAS paying their money.”

Sergio Malatji, another EFF student leader, said about 21,000 students have not been able to register. These students mostly have large amounts of outstanding debt, he said.

“We are demanding that registration be free and all students with historical debt must be able to register. The university has a policy that students must pay half of their debt before registering, but if you owe R80,000 it means you must pay R40,000 upfront. Where must we get that kind of money?” said Malatji.

Thamsanqa Ntaka, 22, said he owes the university about R100,000. He is studying Construction Management and Quantity Surveying and is meant to complete his fourth year but has been unable to register.

Nkata said this debt accumulated over the years. “The university wants me to pay half of my debt before I register. I don’t have the money to do that. This is why we are here today … We want to continue studying and finish our degrees,” he said.

He said the university will continue with its “missing middle” fundraising campaign which has raised about R195 million to support students financially. The “missing middle” refers to students who don’t qualify for free education but who are from homes that struggle to afford university fees.

Lunga Ngqengelele, spokesperson for the Ministry of Higher Education and Training, said a delegation of senior officials would be tackling some of the grievances raised by students in the coming weeks.

He said NSFAS would also be meeting with the South African Union of Students soon to “discuss some of the issues they raised”.

In response to questions about the EFF’s involvement in the protests, Ngqengelele said, “Minister Naledi Pandor urges students not to heed the call to join protests as it will have negative consequences to their academic year.”

Ngqengelele said Pandor had an open door policy for “anyone who wants to bring ideas to resolve some of the challenges.”