Protesters say they have been overlooked for promotions 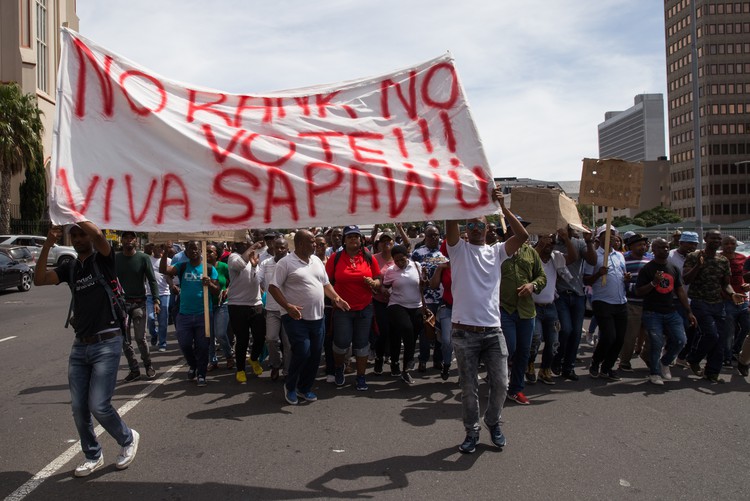 Over 200 police officers marched to Parliament on Tuesday. They presented a petition, signed by over 1,000 people, expressing concerns that members with over ten years of experience are being overlooked for promotions.

The petition claimed that the national police commissioner has promoted members with only nine months experience, but overlooked officers who have been working for over ten years. The commissioner is promoting officers in several specialised units (these are Special Task Force, Tactical Response Team, National Intervention Unit, Counter Assault Team, Close Protectors and Static Prevention), but not officers based at police stations, according to the petition.

“We are not happy,” said Constable Maleki, who has been with SAPS for ten years. According to Maleki, younger employees are getting promoted over those that have been working for a lot longer.

The protesters claimed that the Police and Prisons Civil Rights Union (POPCRU) aren’t listening to their grievances, so they have have started a new union, the South African Police and Allied Workers Union (SAPAWU).

The protest consisted of off-duty officers. “We are not on strike,” said Mphangeli Jingqi, the SAPAWU treasurer.

Jingqi said that the petition was emailed to Parliament but ignored. Police officers then decided to deliver it in person.

But POPCRU spokesperson Richard Mamabolo said that the protesters do not understand a December agreement reached at the Safety and Security Sectoral Bargaining Council (SSSBC). This prioritised the grading and job evaluations of officers in entry-level positions. The agreement aims to promote 28,000 SAPS employees in the next two months, said Mamabolo.

Mamabolo said that SAPS would not have enough money to meet the demands of the protesters.

On Thursday Minister of Police Bheki Cele said that there is a backlog of 69,219 overdue promotions and that the process to rectify this is going to cost R2 billion over three years.

The petition was handed over to Francois Beukman, Chairperson of the Portfolio Committee on Police. The protesters gave Parliament seven days to respond.