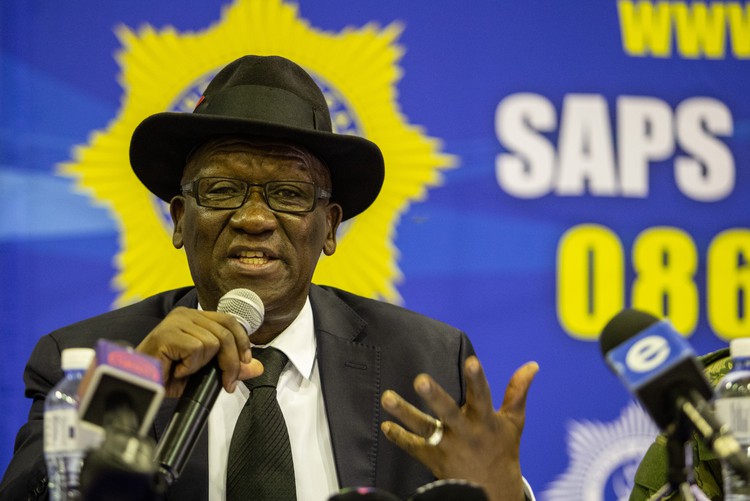 “266 gang strongholds have been searched since 8 November 2018,” said Cele. “We are taking oxygen out of their [gang] life.”

The unit made 119 arrests; nine of these for murder, six for attempted murder; 61% of those charged are still in custody. Cele said that 110 of these charges were “clearly gangster related”.

He said the objective of the AGU was to achieve “a new normal, where our children are allowed to be safe and secure, and women are respected, protected”. Cele dedicated the conference “to the victims of gender based violence”.

Police however did not provide statistics on how the AGU had affected the rates of gender based violence.

In response to a question from GroundUp on whether or not there is an effort by SAPS to work with other branches of government to address unemployment in the community, Cele said that, “We cannot deal with the gangster until we improve the situation with the youth”. He said gangs are competing with communities to attract youth to join their ranks, and that this must be combated with job opportunities.

Various members of the community stood up to praise the efforts by SAPS to combat crime, but many criticised the lack of cooperation with the community. A member of the Mitchells Plain United Residents Association stood up and criticised the politicisation of combating crime, the improper use of community resources, and the difficulty community leaders faced in being heard.

Deputy Chairperson of the Mitchells Plain United Residents Association Michael Jacobson made an emotional plea to work together. “We need to bring the collective efforts of our community together with the partners of police and government. We all need to reduce crime. SAPS cannot do it alone.”

Jacobson told GroundUp: “Our community has become complacent, disorganised, and demoralised … There are high levels of unemployment which leads to poverty and crime, and that is the driver of people committing crime in our areas. If [unemployment] can be reduced, then we can reduce crime.”

Jacobson does not believe that mass arrests of young men is a solution. “Those who are caught with a small amount of drugs, especially the users, they should be put through a rehabilitation program. As soon as they are criminalised, they won’t be able to find a job. If you do have [a criminal record], your chances of employment are zero. Where are you going to find money to support yourself or your family? You’re going to commit more crimes.”