Police kill three people in three days of lockdown. This is normal for South Africa

Lockdown exposes police brutality that has always been widespread and routine 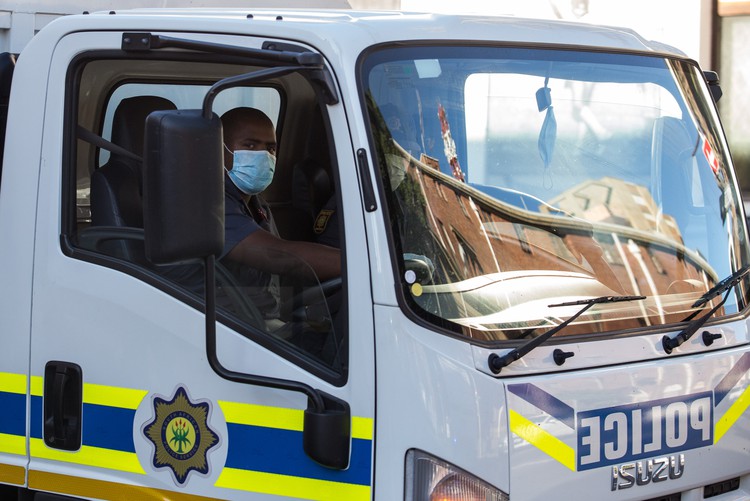 The police deployed 24,000 officers on the first day of the national lockdown. Photo: Ashraf Hendricks

Since Friday, videos on social media showing abuse by police officers during the first weekend of the national lockdown have outraged South Africans. But these videos expose what has always gone on. What we saw this weekend is a consequence of a deeply rooted culture of impunity within the police. It is underwritten by failing oversight mechanisms and a general lack of political will to see the police held accountable.

In fact, official reports to the Independent Police Investigative Directorate (IPID) since the beginning of the lockdown have gone down, dipping below the usual daily average. Between April 2012 and March last year, IPID registered an average of 17 new cases per day. In the three days following the lockdown, IPID registered a total of 21 new cases, according to a statement on 30 March. Perhaps this is an indicator that reporting is more difficult during lockdown.

By comparison, over the same three days in 2018 (the most recent year for which we could access complete data) IPID registered 67 new cases, including 46 cases of “torture or assault”, three related to “death as a result of police action” and one “rape by a police officer”.

In spite of the lower intake by IPID, the rate at which the police have killed people during lockdown – three within the first three days according to the IPID statement – has kept pace with prior trends.

For over a year, Viewfinder has been collating and analysing the records of tens of thousands of criminal complaints against the police, registered since data collection began in 1998. We have spoken to IPID officials about their challenges at the frontlines of investigating torture, assault, rape and murder cases against the police. We have come to appreciate how pervasive abuse by police officers is, and how it outstrips the state’s capacity to enforce oversight and accountability. Our findings have prompted experts to publish policy recommendations which were heeded by Parliament’s Portfolio Committee for Policing (PCP) and IPID.

This video, circulated by community leader Thabo Meslane at the weekend, purports to show a police officer beating a man with a sjambok on day 2 of the Covid-19 lockdown in Khayelitsha.

While offending police officers are scattered across hundreds of precincts, there are often discernible trends in how, where and when abuse is meted out. Reported incidents are concentrated in poor communities. Protests and gatherings often invite disproportionate force. The method for torturing suspects in custody – particularly via suffocation by “tubing” – are remarkably consistent across precincts and provinces. The circumstances within which extortion and bribery occur often have much in common.

People perceived as criminal suspects, as many out on the streets during the lockdown are, are often assaulted or shot at without cause. Some of these suspects die as a result, as happened to a Ravensmead man who collapsed and died after an assault by police on Friday morning.

We believe that the trends indicate that police officers do not act in rogue isolation when they commit these offences. They are not “bad apples”, as is often claimed by police management when distancing itself from incidents that attract public outrage. When they abuse, police officers often act within decades-old traditions and the unwritten prescripts of their organisation. They usually have a deep regard for their place in the institution’s hierarchy and act under the tacit direction of their superiors. Those who tend away from committing abuses themselves often enforce a code of silence when they witness or suspect abuses by their colleagues.

The police appear no less brazen during this time of intensified scrutiny. If the many recent videos are verified, officers have largely ignored the cameras that have recorded their offences. Police officers enforcing the lockdown with rubber bullets and sjamboks on the streets of Hillbrow in Johannesburg on Tuesday shrugged off probing questions from reporters. They were following orders from “the top”, they said.

In the current hierarchy, former police commissioner and current police minister Bheki Cele is that top cop. Last week Cele warned of arrest and consequences for anyone found to be in contravention of the lockdown regulations. The ascendancy of the police over the country’s top public health official was evident last week when Cele contradicted Minister of Health Zweli Mkhize’s assurance that jogging and dog walking would be allowed during lockdown. The health minister later recanted and deferred to Cele.

Anticipating the potential of heightened repression during lockdown, President Cyril Ramaphosa framed his short address to the police on Thursday as a call for restraint.

“I expect you, as you implement this 21-day lockdown, to do so with compassion. To do so with great understanding. To do so with respect for the people of our country. To do so with humility as well,” Ramaphosa said, in an address to police officers on Thursday.

Despite Ramaphosa’s plea, the first 72 hours of the lockdown will be remembered for exactly that: skop, skiet en donder.

Across the planet, people have questioned what type of world will emerge from the Covid-19 pandemic. Some have warned that states with authoritarian tendencies will exploit the fear of the pandemic and the restrictions of lockdown to roll back freedom in their countries over the long term. In South Africa a reframing of this question is warranted: what type of police service will emerge from the pandemic and the lockdown?

Fortunately, a trend towards greater repression, abuse and impunity is not inevitable. The sudden attention on the police’s criminal and abusive operations in poor communities has created a rare moment of national reflection. Where there have been concerning developments since Friday, there have also been encouraging ones.

For one thing, many ordinary people have used their cellphones to record the types of abuses which often remain hidden in the statistics or go wholly unreported. Their right to do so has been affirmed by Right2Know, which warned the police not to prevent the public “from exercising their constitutional right to film and record incidents”. Journalists have justified their status as essential workers by acting as first responders to the scenes of the worst abuses by the police. In particular, reporters from the Daily Sun and Daily Voice filed frontline dispatches from the scenes of the lockdown’s first two killings by police. These reporters brought us the names and photos of victims Sibusiso Amos of Vosloorus and Petrus Miggels of Ravensmead when we most needed to see them.

A front of civil society organisations has established the C19 Peoples Coalition and pooled resources to ensure that the national response to the pandemic is “effective, just, and meets the needs of the most marginal”.

Coalition partner Lawyers for Human Rights has established a hotline (+27 66 076 8845) for rights abuses, including reports of brutality by the police and military. Viewfinder sits in on the coalition’s anti-repression working group, which has monitored reports of abuse and is developing a model for civilian oversight of the police and army during lockdown. Hopefully, this group will be able to establish a more sustainable mechanism to support IPID post-lockdown.

IPID is in desperate need of more support and funding. Viewfinder recently happened upon an expansion strategy drafted by IPID in 2014. It laid out a detailed roadmap for the directorate to become more accessible to rural and vulnerable communities through the establishment of more district offices. The implementation of the strategy pivoted on lobbying support from Parliament and funding from the Treasury. Neither was forthcoming. In the six years since, IPID has in fact rolled back its footprint in rural communities. Political interference, apparently aimed at undermining corruption investigations into current and former police top brass, has left a leadership vacuum and further hampered IPID’s capacity.

Over the past few days, politicians used the uniqueness of the lockdown moment to call out abuses by the police. These calls will ring hollow in time, if they do not lead to a better resourced IPID and policy interventions to hold the transgressors and police management accountable long after the lockdown has ended.

Daneel Knoetze is the founder of Viewfinder, a journalism project incubated by GroundUp. This article is co-published with Viewfinder.