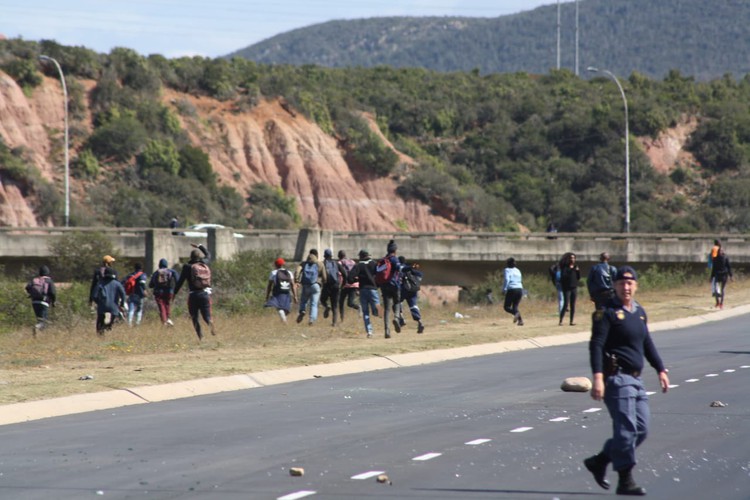 Students were chased down Mel Brookes Avenue towards the bridge and river during a protest over NSFAS’s allowance policy on Wednesday. Photo: Thamsanqa Mbovane

About 200 protesting students said they were unhappy with a policy that required an 80% class attendance rate and wanted amnesty for the month of July in order for them to qualify for the National Student Financial Aid Scheme(NSFAS) allowances. Students began protesting after they said management failed to pitch up for a meeting to discuss their concerns about the policy. The college has disputed this.

During the protest on Wednesday, students say they were shot at with rubber bullets, beaten, chased and teargassed. Four students were arrested. They are due to appear in the Uitenhage Magistrates Court on Thursday.

Luthando Puta, of the student representative council, said, “We were protesting and demanding amnesty at school premises. Many of our students were not paid NSFAS funds since February.”

Puta said that private security guards arrived with the police at the college and “shot at us in the bums, legs, arms and face”. Protesting students threw stones at police.

Student Zolani Mabadi had a bleeding wound on his forehead. He said, “We were singing outside the school and did not break or burn anything. A team of security guards wearing black beat and chased us until we ran into the bush and river.”

College spokesperson Kate Oladimeji said that the 80% attendance policy was a direct instruction from the Department of Higher Education and Training and had been communicated to the SRC.

“We were bewildered by the protest because there was an agreement between management and the students to meet on Tuesday [27 August] and the students did not show up for the meeting,” she said.

Police spokesperson Captain Gerda Swart confirmed that four male students aged between 20 and 22 were arrested. They are due in court on Thursday.