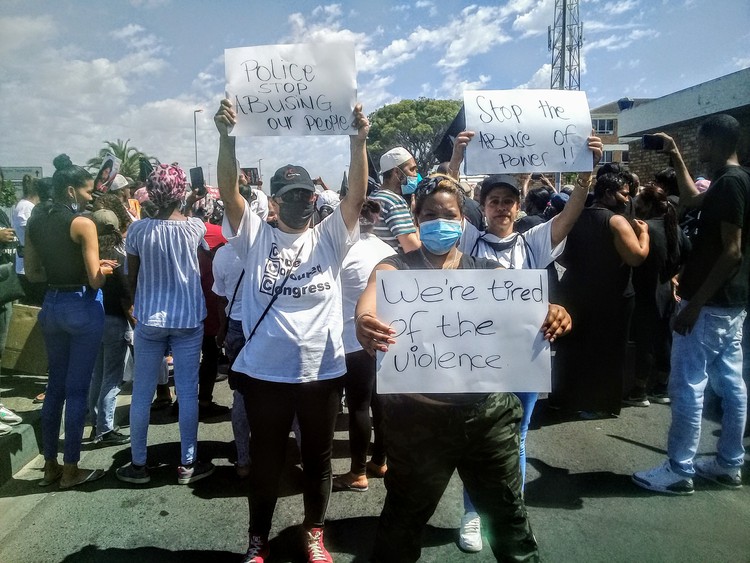 Rashida Harris, Roxanne Carstens (centre) and Naz Goliath were among 60 protesters outside Mitchells Plain SAPS on Wednesday. Carstens said she lost her close friend to a gang shooting last weekend in Rolbal Crescent. “Many of the gangsters are very young and they just kill innocent people. We just want to be heard for once,” she said. Photo: Marecia Damons

Dozens of people protested outside the Mitchells Plain police station on Wednesday against police brutality and to demand better visibility and response times.

According to Viewfinder’s Police Accountability Tracker dashboard, police officers in Mitchells Plain, one of Cape Town’s largest townships, have been accused of four deaths in custody, ten killings, 12 rapes, 49 shootings and 370 assaults registered between April 2012 and March 2020.

“We’ve reached a point where the police drive past us while the community is begging for help,” said Rochelle Dick from Beacon Valley. “If a police officer is moving in the community and sees something wrong, they’re supposed to stop and help.”

She said the community needed more transparency from SAPS on a plan to combat crime, especially gangsterism in the area. “They say they are here to protect and serve us, yet our children are being beaten up and assaulted by the police. Our children are being pepper-sprayed while standing in their yards,” she said.

Charmaine Maarman said, “In our area, it’s all about territory. On the left side of the road is one gang and if you cross the road it is another gang’s territory. You have to look over your shoulder all the time. You cannot even walk alone from your home to the town centre. You’ll be killed. There’s no value to life anymore.”

Seven of the ten police stations with the highest reported drug-related crime cases are in the Western Cape. Mitchells Plain had the most drug-related cases, followed by Kleinvlei, Cape Town Central, Atlantis, Steenberg, Lentegeur, Delft and Bishop Lavis.

Elsies River, Manenberg and Mitchells Plain were also among the ten police station with the highest number of attempted murder cases in the Western Cape.

In his address on the latest crime statistics in August, Police Minister Bheki Cele said the Covid pandemic had severely impacted the police force, as it has not taken in new recruits in 2020 and 2021.

But while speaking at an imbizo in Mitchells Plain earlier this month, Cele stressed that the Western Cape was the most resourced province in terms of policing and had the “lion’s share” of such support.

This statement has been refuted by Premier Alan Winde.