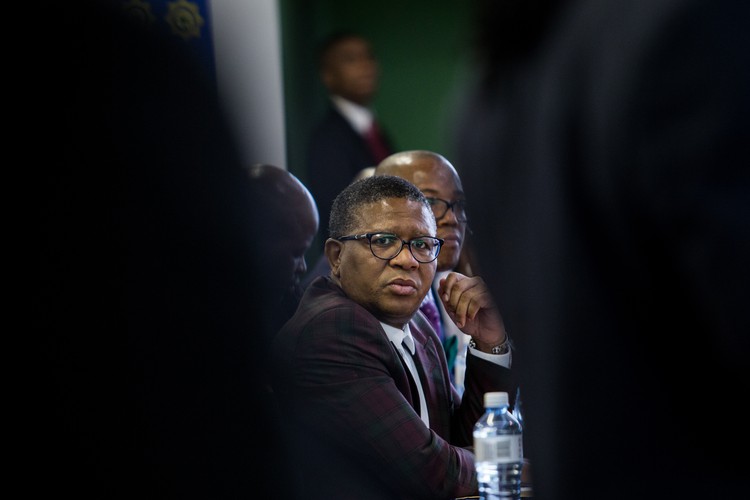 Residents of Marikana confronted police minister Fikile Mbalula on his visit to crime-ridden Philippi East on Tuesday with complaints about police failures.

One after another, residents of the informal settlement where 11 people were shot dead at the weekend said they grappled with crime daily and police were unsympathetic.

According to the most recent police statistics, Philippi East police station has to cover a population of 56,093 people with 145 police officers. This is more than twice as many people and fewer police than stations such as Sea Point which covers 24,808 people with 161 officers or Woodstock with 170 officers to cover 27,551 people.

“When we Marikana residents report crime at the police station, the police say that they are fed up with our complaints and that we are bad-mannered,” said Joseph Makeleni.

He said thugs lived in shacks full of furniture stolen from a local shop.

“Each thug has five guns and a police bullet proof vest, and they make you eat raw meat while you are cooking it if you have no money,” he said.

Makeleni said criminals made a father have sex with his daughter and granddaughter while they watched.

A resident wearing a warm winter jacket told the minister: “I wear this jacket daily when I’m sleeping outside to watch over my family.”

“I want the minister to tell me when he will install streetlights and when he will give us a mobile police station in Marikana,” he said.

Resident Ntsikelelo Konisani said: “If you report to police that thugs have killed a person, they refuse to go to the scene. They tell you to photograph the killer.”

He asked the minister to consider the plight of ex-convicts who were forced to return to a life of crime because they could not find jobs.

Mbalula, who was due to speak at 10am but finally addressed residents several hours later at Vuyiseka Senior Secondary School in Lower Crossroads, promised to send 40 additional police officers to root out crime in the area.

“We will add 40 police fresh from the college,” he told the assembled residents.

He said there would always be a shortage of police officers in the Western Cape “because of the density and increasing number of people”.

Mbalula said he had deployed Colonel Bongani Mthakathi as station commander at Philippi East police station, an announcement that met with applause by residents.

Western Cape commissioner Lieutenant-General Khombinkosi Jula said he had launched Operation Hlasela to curb crime in Philippi East and Nyanga. A total of 45 people had been arrested in the last 24 hours, he said.

He promised six extra police vans for the station.

Mbalula said: “Criminals should know they are in trouble from today.”

Speaking in Parliament earlier, Jula said three people had been arrested after the weekend shootings and were in custody.

But, he said, the absence of roads or street lights and the density of the settlement made policing in Marikana difficult. “These shacks are so congested” said Jula. He told Parliament’s portfolio committee on police that police patrols in the area were “not possible at all” at night due to safety concerns for police officers.

MP Pieter Groenewald questioned how the police could not manage an area of less than six square kilometres. “Something is very wrong here,” he said.

But deputy police minister Bongani Mkongi blasted police officers who were afraid to work in Marikana. “A cop who can’t go where crime has happened is in the wrong job,” he told residents at today’s meeting.

Dalli Weyers, senior researcher at the Social Justice Coalition, said the lack of police visibility in dense settlements like Marikana was a problem. “The recent outbreak of violent crimes we’ve seen could’ve been prevented if the police had been visible,” he told GroundUp.

Weyers said without national guidelines for policing informal settlements like Marikana, officers on the ground had no way of knowing what to do if the area was inaccessible by police car.

“Police themselves say that they feel unsafe going into the area. There should be some guidelines for police to go into informal settlements on foot in teams of four, or by bicycle or horse. At the moment SAPS has no idea how to get into these communities. So we have situations where police just don’t go into an area where they could’ve spoken to residents and dealt with criminals,” he said.

Mbalula told the crowd that the police service had been “infiltrated by thugs” who gave information about police operations to criminals. “It is not criminals who are defeating us, but bad cops who work with thugs.”