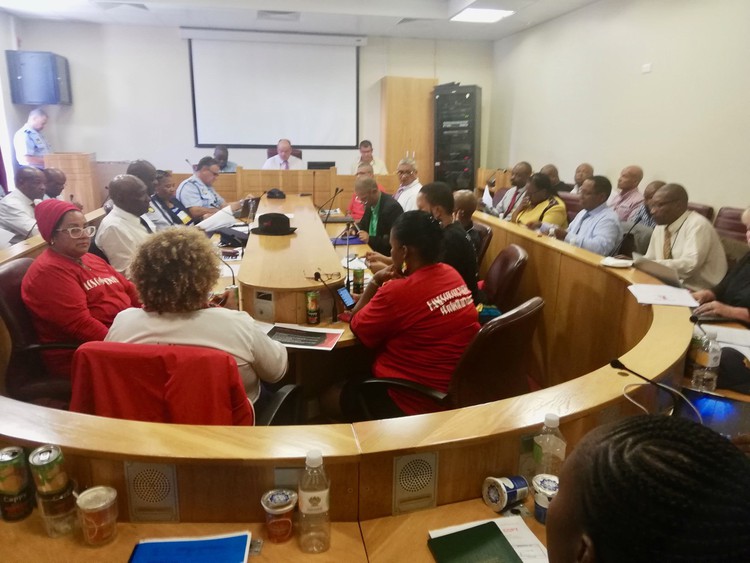 The Minister of Police and high ranking officials reported to Parliament on progress made by the anti-gang unit formed last year in November. Photo: Thembela Ntongana

On Wednesday, Minister of Police Bheki Cele, National Commissioner Lieutenant General Kehla Sitole and Major General Leon Rabie reported to Parliament’s Portfolio Committee on Police on progress made by the anti-gang unit since its formation in November last year .

Rabie said the anti-gang unit was a national approach to curb gangsterism in hotspots across the country with a special focus on the Western Cape, Gauteng and the Eastern Cape. He said SAPS would create anti-gang units in all nine provinces by 2021. Currently, the Western Cape is the only province with a fully fledged unit; other provinces still operate with task teams.

Rabie said they had identified 20 gangs in the Western Cape; 10 in the Eastern Cape. He said R20 million in total had been assigned to both the gang unit and Operation Thunder, formed in May 2018.

A month after the anti-gang unit was formed, Minister Cele declared the unit a success, saying it had made a total of 119 arrests with 110 of them gang-related, including nine arrests for murder and six for attempted murder. Rabie said five hit men had been arrested linked to cases under investigation. He said the number of murders in the Western Cape was declining, with December an exception.

“We are also looking into the matter of witness protection … We are also implementing a school safety strategy to create a safe environment for children where they can go to school and walk in the streets,” said Rabie.

Various community-based organisations, community policing forums and unions and union federations, including the Congress of South African Trade Unions (COSATU), the United Public Safety Front and the Police and Prisons Civil Rights Union (POPCRU), were also given a chance to weigh in on how the unit could improve.

“The are growing levels of criminality and killings across our nation,” said Tony Ehrenreich, COSATU’s deputy parliamentary officer. “Working-class communities’ experience of gangs is really the shootings taking place and the drugs that are tearing apart our communities and stealing the future of our children. … The schools themselves are becoming war zones,” he said.

POPCRU General Secretary Nkosinathi Theledi said the organisation was worried about “serious mistrust” between communities and particular police officers and the collapse in relations due to dysfunctional community policing forums. Some police officers were even perceived as enemies and attacked by the community.

Lucinda Evans from Lavender Hill, who is a member of Philisa Abafazi, an organisation that supports victims of gender-based violence, listed three cases in which she said police had failed. One case involved the rape of a 13-year-old girl. Though the girl had been found unconscious with two men, no arrests had been made and three months later there were still no DNA results. In another case, a woman reported to the police that her husband was going to kill her. She was told to come back with a protection order.

“This is the horror that women are facing … I want to speak to the committee today about the training these police get. Why are some of the police officers in some of the police stations still looking for the black eye and the broken lip?”

“Emergency safe houses are a dire need; a place where women can stay for at least seven days, receiving care and counselling. There are no volunteers in the victim support rooms in the police stations. Those rooms are empty,” said Evans.