Police and NPA want land occupiers “punished by the courts” 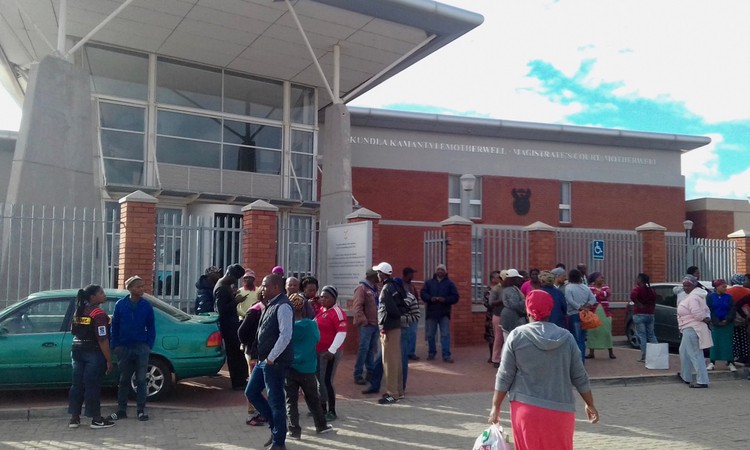 A group of Wells Estate shack dwellers gather outside the Motherwell Magistrates’ Court on Thursday. The case was postponed. Photo: Joseph Chirume

On Friday morning, 17 people arrested in connection with protests against shack demolitions in Wells Estate, Port Elizabeth, appeared in the Motherwell Magistrates’ Court. They will remain in custody until 29 and 30 June, when they will appear for a bail hearing.

Twelve were arrested on Monday and another five on Wednesday. Police had raided shacks and confiscated 18 petrol bombs, a five-litre can of petrol, and 30 tyres.

The police and the National Prosecuting Authority [NPA] have agreed to press for deterrent sentences. Police spokesperson Captain Andre Beetge said, “We discussed the trend the protesters are taking, especially targeting moving vehicles. On Wednesday, the protesters attacked a bus carrying school children. Two weeks ago, two commuters were seriously burnt when trying to escape from a burning bus. A German tourist couple was also attacked this week on the Addo road on their way back from Addo National Park. The man sustained injuries to his neck.”

He said the police and NPA wanted the land occupiers to “be punished by the courts, because it’s becoming very, very serious”. He said six trucks and one car were burnt out, and four trucks, two buses, and three cars were stoned.

Beetge said the 17 suspects will face various charges, including public violence, possession of explosives, and damaging critical infrastructure. “Both the police and the prosecuting authority agree that due to the violent nature of these crimes, additional charges need to be added,” he said.

Beetge said some of the protesters could face additional charges of attempted murder.

On Friday, authorities were cleaning up where shacks had been demolished in NU29 and NU30. There was no violent resistance.

Land occupiers from Ehlovini in Wells Estate were at the court hoping to pay bail for their arrested colleagues. However, they arrived after the court proceedings, which were completed by 9am. One of the community supporters, Lazola Makana, was angry. “The police are treating us as criminals, while we are fighting for our rights. Shelter is a basic human right. From here [court], we are going back to our destroyed shacks.”