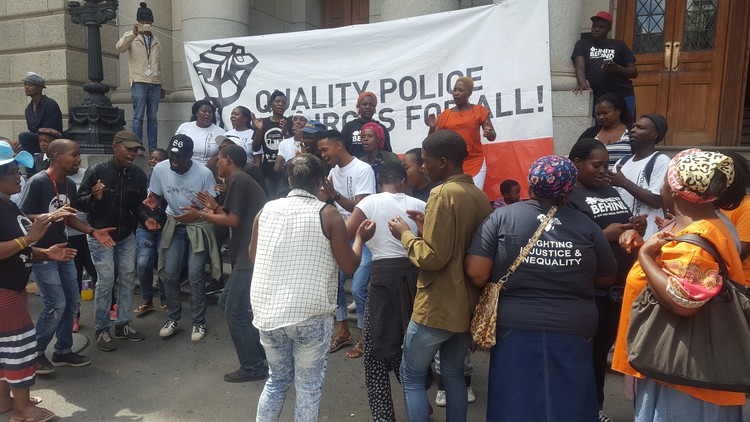 SJC members outside the Western Cape High Court on Wednesday where the police resources case is being heard. Photo: Mary-Anne Gontsana

The Social Justice Coalition’s (SJC) Axolile Notywala has described arguments made by the South African Police Service in a court case about police resources as “offensive”.

Speaking to GroundUp, he said Advocate Renata Williams, who is representing the police, had basically accused the SJC “of being racist because of the kind of relief we are seeking”.

The application brought by the Social Justice Coalition, Equal Education and the Nyanga Community Policing Forum being heard in the Western Cape High Court asks the court to declare that the allocation of police resources discriminates against poor and black people.

She said the SAPS claimed to make constant updates to the THRR, but had not provided any evidence for this claim. Furthermore, SAPS contended there can’t be additional factors included in the THRR, but it is constantly reviewed.

Advocate Peter Hathorn, also representing the applicants, said the police had failed to disprove that their resource allocation was discriminatory.

Hathorn said they had no problem with the fact that the THRR did not take race into account, but nonetheless, its outcomes were unintentionally discriminatory.

He said the Khayelitsha Commission of Inquiry into policing had made the bias of resource allocation very clear. Researcher Jean Redpath had given an affidavit which analysed the allocation of police by population size and crime trends.

Judge MJ Dolamo asked, “Do we just accept Redpath’s method? We need to know what Redpath is an expert in.”

Hathorn said no one has questioned Redpath’s method and her calculations were unchallenged. He noted that Brigadier Leon Rabie had accepted and confirmed Redpath’s analysis during the Commission and he had conceded that black and coloured areas were under-resourced.

Ending off the arguments, Advocate Michael Bishop, also for the applicants, responded to the police argument about data and analysis in Redpath’s affidavit. Bishop said Redpath was showing the unequal distribution of police resources, not proposing an alternative model. “Much effort has gone into creating the THRR, but its results are discriminatory,” he said.

The case was adjourned for possible further submissions and for the two judges to go through the documents.