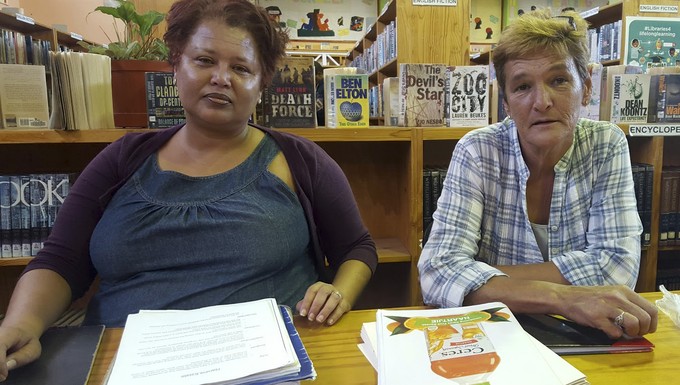 Karen Saligee and Beverley Strong of the Naruna Estate Residents Association have been battling to get hold of a copy of the provincial rental policy. Photo: Mary-Anne Gontsana

The provincial government has promised to provide Naruna Estate tenants in Plumstead with a copy of the rental policy they have been trying to get hold of for months.

Tenants were told by the Western Cape provincial department of human settlements that in terms of a new rental policy, those with an income below R3,500 per month would be relocated to Pelican Park, about seven kilometres away. Some of the tenants have been living in Naruna Estate for more than 20 years.

But the tenants have battled to get a copy of the rental policy documents.

With support from Ndifuna Ukwazi, the tenants made a request on 19 January under the Promotion of Access to Information (PAIA) Act for the rental policy and other documents. The request was refused and the department said instead that the policy document could be viewed at the provincial offices; tenants would not be allowed to make copies and would be monitored during viewing.

Karen Saligee, chairperson of the Naruna Estate Residents Association, said tenants had gone to the provincial offices to view the documents on 30 March, but things did not go as planned when they got to the provincial department.

“So we ended up not viewing the document at all and we have no knowledge of the content.”

She said it was important for the tenants to get access to the documents before a meeting with the department on 25 April.

Zalisile Mbali, spokesperson for provincial human settlements minister Bonginkosi Madikizela, said he was not aware of the tenants coming to view any documents.

He would not confirm the date of the meeting but promised that the revised rental policy would be made available to tenants before then.

“Tenants will be provided with all the necessary and relevant information in preparation for the public participation engagement,” Mbali said.