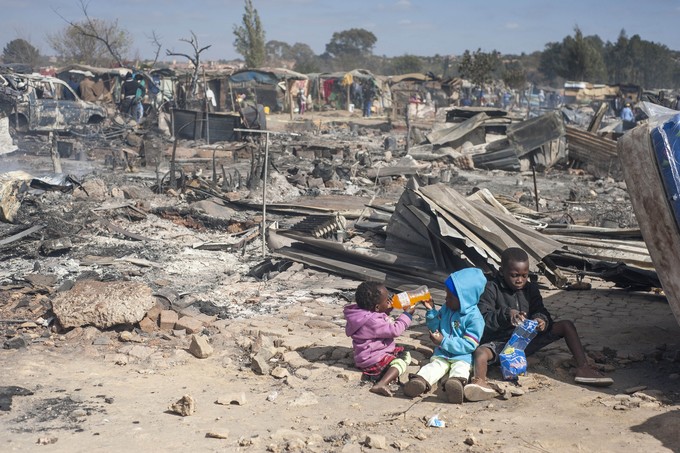 Plastic View was devastated by a fire on Sunday morning. Photo: Ihsaan Haffejee

Five people died and hundreds were left homeless after a fire tore through Plastic View informal settlement, east of Pretoria, in the early hours of Sunday morning. The cause of the fire has yet to be determined.

High winds spread the flames on a bitterly cold night.

Hardlife Muyambo, 29, sits on a log on the scorched earth where his home once stood. His exhausted wife tries to get some some sleep. His two children, aged five and two, play with scraps of metal.

Resident Hardlife Muyambo and his family survived the fire.

“That fire was like the devil,” says Muyambo, who is originally from Zimbabwe. The majority of the residents are immigrants from Zimbabwe, Lesotho and Mozambique.

“I was sleeping when my friend David woke me up. We just got up and ran. I wanted to save some of our belongings, but there was no time,” says Muyambo.

“Last night was crazy. People were running, screaming and losing their minds,” says South African resident David Masetlwa, 52, who shared his home with the Muyambo family. “The fire was dancing. Moving from side to side, getting louder and bigger and making strange noises. When people’s cars were blowing up, it sounded like bombs. He [Muyambo] still wanted to go back into the home to get his shoes. I told him, are you crazy? Do you want to be burnt alive for a pair of shoes?”

Last year, Muyambo lost his right arm in a work-related accident with a concrete crushing machine.

He breaks down in tears. “After my accident, I realised that no one wants to give work to a man with only one arm. So I opened a spaza shop, here at the house, selling some fruit and vegetables and other things. People here supported me because they could see that a disabled guy is trying to provide for his family.

“But now everything is lost, all my stock burnt, our home gone; I don’t know where my children will sleep tonight.”

Residents combed through the ashes and wreckage. Aid organisations and a local church mobilised to provide relief. Donations of food and clothing were collected at the large NG Kerk which borders the settlement. Residents queued patiently to receive a hamper. Gift of the Givers provided 200 tents.for the survivors.