KwaNobuhle residents have been complaining about leaks for two years, they say 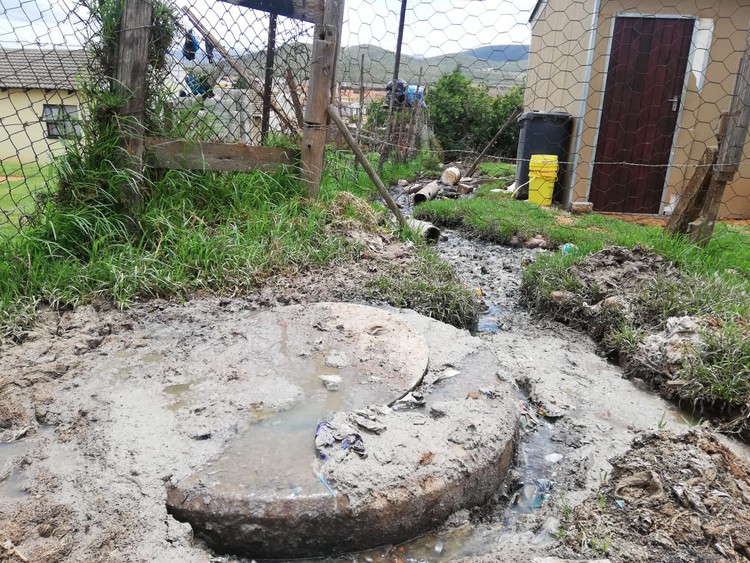 Residents say sewage has been bubbling out of the drain in KwaNobuhle for two years. Photo: Thamsanqa Mbovane

Herds of grunting pigs feast on human excrement bubbling from a filthy drain in KwaNobuhle township in Uitenhage. Residents say they have been complaining for two years, but the municipality has not fixed the problem.

Distraught RDP house owner Sipho Sotokwe says the stinking “river” running at the back of his house at Joe Modise and down his neighbour’s backyard attracts herds of pigs that eat the excrement.

“They dive into the river of sewage and when faeces floats down from a blocked drain they grab it like a meal, ” says Sotokwe.

The 51-year-old father of five boys says that the river also attracts mosquitoes, frogs, and cows.

“There is a pigsty and a kraal in the nearby bush. Pigs are always here as if it’s their swimming place. Every time people flush their toilets, my drain reacts, ” says Sotokwe.

His neighbour, Nomsa Gotyana, says she can’t even build a wall around her house because the ground is too wet. “This is like a pigsty,” she says.

Residents told GroundUp municipal workers had been to their houses several times. They provided us with four reference numbers for complaints they had lodged with the municipality.

“A team that came on 1 January said this is now beyond their control,” said Sotokwe. He said another team came the following day but that they have also given up.

Mayoral spokesman George Geleba said he had “escalated the matter to the area superintendent for an immediate action”.

Asked why it had taken so long to “escalate the matter”, he said: “We don’t know exactly when this problem occurred. Some of the reference numbers we got are not on our system. Only one out of three references we got three weeks ago could be traced.” He said that he would have to call the toll free number that maintains the complaint references. “That’s where they do record-keeping.”