Police deny anyone was hurt during dispersal of water protest 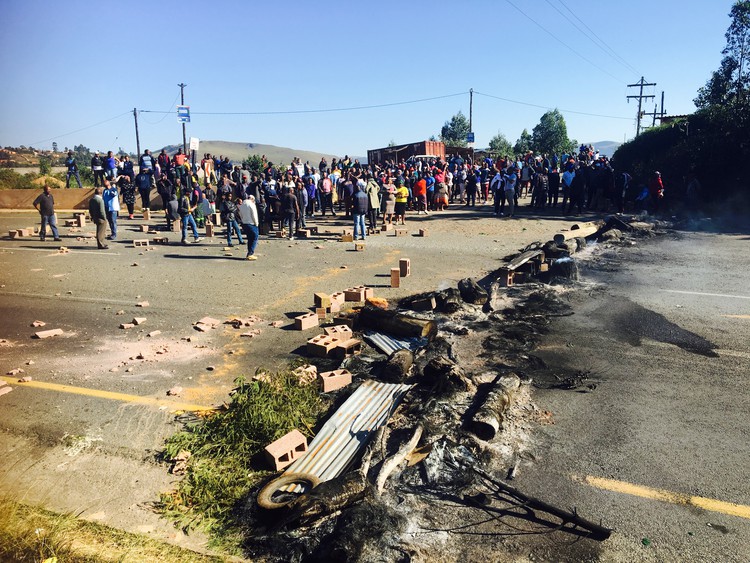 Protesters in Henley Village in Pietermaritzburg blocked the main road in a protest about the water supply. Photo: Nompendulo Ngubane

Police used rubber bullets and teargas to disperse protesters during a community protest in Henley Village in Pietermaritzburg on Monday. According to Henley Village Chief Bu Ngcobo two protesters were injured and one is in hospital.

Residents say they want access to water. They say the water has been on and off for two years and they have to fetch water from Shange location.

Njilo promised two water tankers as a temporary solution but residents told GroundUp that they sent the water tankers back after police started shooting.

SAPS KZN Media Centre Lieutenant Thulani Zwane said he was not aware of any shooting.

“No arrests have been made. Police dispersed the protesting members of the community. No case of shooting has been opened on our side,” said Zwane.

“We are sick and tired of telling them the same thing,” said resident Nkokhelo Dlamini.

“We are only fighting for our basic human right. That is in the South African constitution. We want them to open the water. The mayor has been in this area on several occasions. He knows what is going on. The mayor lives a few kilometres away from our homes. He promised to fix the matter. Nothing has been done,” said Dlamini.

He told GroundUp they started the protest in the morning.

“We have been trying to call the municipality. All they have been telling us is that they are in a meeting discussing our matter. Our children are writing tests at school. We have called the schools and told the teachers they are not coming. This is unfair to our children,” said Dlamini.

Residents say the water tankers do not supply the whole community.

Njilo was accompanied by deputy mayor Thobani Zuma and municipal speaker Jabu Ngubo. He said the municipality was faced with sabotage of the reservoirs. A reservoir which supplies water to other reservoirs had been damaged, he said.

“The tanks need to have at least 40% water. Currently the tanks are at 7% which makes it impossible for the water supply. That is why we are currently faced by a water scarcity. They have damaged the valves and the pipes of that reservoir. The municipality is fixing that. We have decided that we need security to avoid these sabotage incidents,” said the mayor.

The community said they would close the road until water returned to their taps. They have threatened to continue with the protest on Tuesday.

“Two water tankers cannot deliver water to the whole community,” said Kholeka Mchunu, who says she has been living in Henley for five years. She said residents had other complaints but “the priority today is water”.

Ngcobo said the matter had not been sorted out. “We sent the water tankers back. Police started shooting and people were dispersed. There is still no water,” he said.