“Despite what the company says, we will not give up” 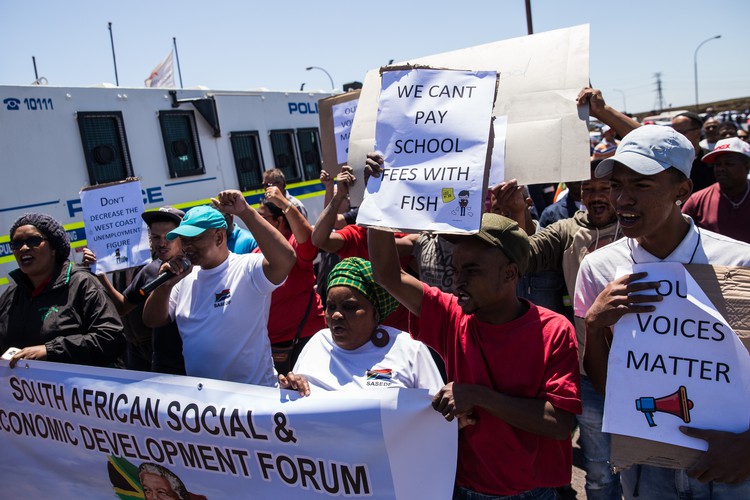 About 50 people picketed outside the Saldanha Steel plant on Thursday to protest against the phased closing down of the plant by ArcelorMittal South Africa. Photo: Ashraf Hendricks

About 50 people picketed outside the Saldanha Steel plant on Thursday, to protest against the phased closing down of the plant by ArcelorMittal South Africa (AMSA).

A statement released on 11 November by Kobus Verster, CEO of AMSA, read: “Over the years, the structural cost advantage has been eroded and Saldanha can no longer sustainably and effectively compete in these markets, mainly due to raw material and regulated prices … Saldanha has incurred substantial losses in the past and the short to medium term outlook remains bleak,” said Verster.

The statement said AMSA had implemented various initiatives “to manage costs and optimise efficiencies”. It had also concluded a process at the Commission for Conciliation, Mediation and Arbitration “to strengthen the sustainability of the business in the longer term”.

Sammy Claassen, a member of the South African Social and Economic Development Forum, which organised the picket, said, “This is bad news for the West Coast and South Africa. We need steel manufacturers that produce quality steel. A thousand people will lose their jobs because of this and that means thousands of families will be affected.

“Another thing about this whole closure is that the community was not consulted about it. Saldanha Steel came into existence because of the Saldanha community, but now, when decisions like these are being made, the community is shut out. The people at the top are having meetings behind closed doors,” said Claassen.

He said the community first heard about the closure through media reports and did not even know the reasons for the closure.

“If they are working at a loss or struggling to sustain the plant as the media says, then why don’t they ask help from government? Why doesn’t government intervene? If a big company like this closes down, it affects small, medium and micro enterprises and entrepreneurs, who are providing jobs,” said Claassen.

The picketers chanted, “We want steel!” and held placards that read: “We can’t pay school fees with fish” and “West Coast ghost town”.

Shaheen Baadjies, owner of Cosmo Couriers, has been a contractor to Saldanha Steel for 21 years. “We are all saddened by the news. You could feel how sombre the mood was on site after workers heard about this. The socio-economic impact of this closure will be huge. I will have to let eight people go because of this.”

“If they take away Saldanha Steel, we will only be left with fishing. This closure will mostly affect the young people, because they are the ones who are employed at the plant. I have an office on site and I have to close it down by next year February,” said Baadjies.

According to AMSA’s website, the Saldanha plant is export-focused, close to the deep-sea port of Saldanha. The plant was commissioned in late 1998. The plant was designed to produce clean steel, with virtually no impurities such as tin and copper.

Ethne Lawrence from the Saldanha Bay Municipality said the municipality had teamed up with the Western Cape Department of Economic Development and Tourism, the local chamber, some business support organisations, and AMSA.

“This group of partners recently met to ensure that we identify the SMMEs and individuals that are most affected and to lobby with all the support organisations we can, in order to look at business distress support measures. We have to allow AMSA to complete their legal processes with their employees, but we will engage as early as possible to understand if there is any support we can give to individuals,” said Lawrence.

Claassen said, “Despite what the company says, we will not give up. We are determined to make sure that Saldanha Steel remains open.”