Picket against deductions from social grants 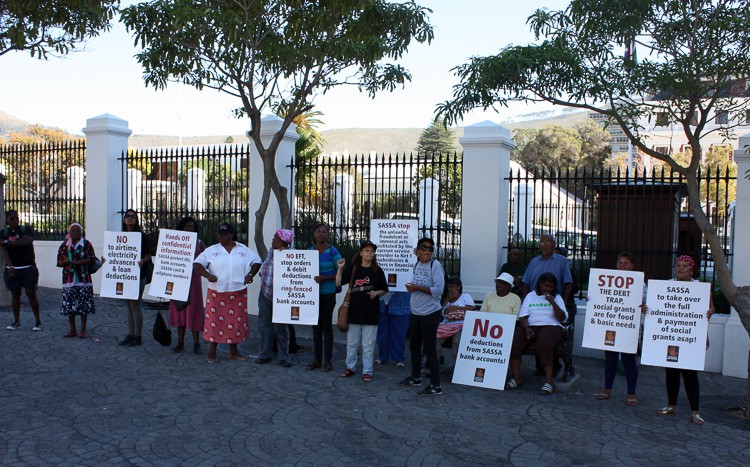 Pensioners and supporters picketed on Tuesday at Parliament to protest against deductions from their social grants. Photo: Trevor Bohatch

About a dozen pensioners and their supporters, backed by Right2Know, picketed outside Parliament today to protest against unauthorised deductions from their South African Social Security Agency (SASSA) accounts and the sharing of their biometric data.

The picketers also called for the resignation of Social Development Minister Bathabile Dlamini.

Siphokazi Pangalele, a provincial coordinator for Right2Know, said the pickets, which started last week, would continue “until we get what we want or our questions are answered.”

One of several young picketers, 26-year-old Pangalele said the deductions should be a concern of South Africans of all ages, not just pensioners. “It scares us, the young ones who pay tax now,” she said.

Another young picketer, 22-year-old Tiana Albrecht, said that nearly R1,000 was being deducted from her mother’s SASSA account every month for airtime and electricity. The deductions left her with around R600 to get through each month. “She can’t pay her bills,” Albrecht said.

The protesters, a majority of whom were from Mitchells Plain, said protesting was their last option, after appeals to SASSA in Mitchells Plain continued to go unanswered.

Though SASSA’s child support grant is supposed to be R380 per month, the family only receives R80 after deductions. What is left over is not enough to take care of her granddaughter and Payne said neither she nor the child’s mother had authorised deductions from the account.

Payne said her daughter was unwilling to “lose a day’s work” to visit a SASSA office, especially when their previous requests had not been met. She also said problems with payments were perpetuating the cycle of poverty which grants had been created to end.