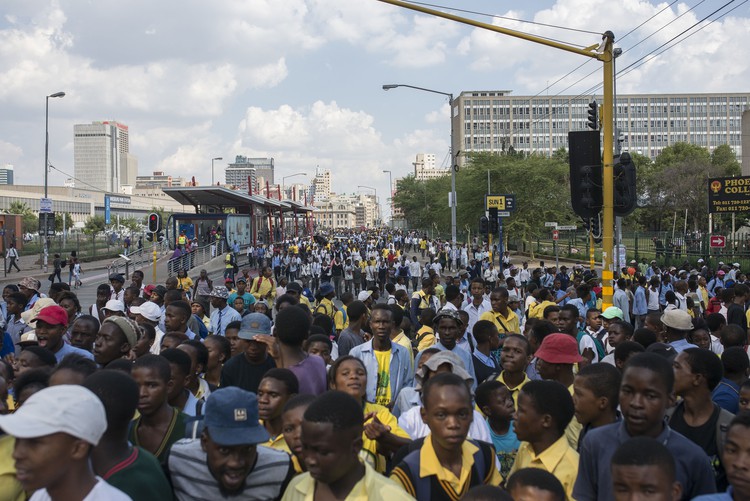 School student protesters march through the centre of Johannesburg to the mayor’s office.

Thousands of school students poured out of trains at Johannesburg’s Park Station on Friday and made their way up Rissik Street to Metro Centre in Braamfontein where the office of Johannesburg Mayor Herman Mashaba is located.

The protesters were led by the Congress of South African Students (COSAS) who wished to hand over a memorandum of grievances to the mayor. Students were confronted by a barbed wire fence and a line of riot police who blocked the road leading up to the metro building.

Police spokesperson Kay Makhubela said that the students did not receive permission to hold the march. “We have not received any reports of violence or looting and we believe the students will disperse peacefully after they have delivered their memorandum,” said Makhubela.

A few students picked up rocks and sticks as they voiced their frustration at being blocked from proceeding. “We are surprised that when they are robbing millions in cash from OR Tambo that the police are nowhere to be seen but when we come here as peaceful students then hundreds of police are here to intimidate us,” said Penuel Maduna a COASA leader.

Students handed over their memorandum to a representative of the Metro Police who indicated that he would give it to the relevant authorities.

The demands included cheaper transport, sanitary pads for girl learners, better facilities such as swimming pools and football grounds at township schools and free and reliable internet. The leadership also called for the resignation of Johannesburg Mayor Herman Mashaba who they claimed is responsible for the recent xenophobic outbreak due to his careless remarks about immigrants.

The protesters then returned to Park Station and boarded trains home after giving the office of the mayor seven working days to respond to their list of grievances.