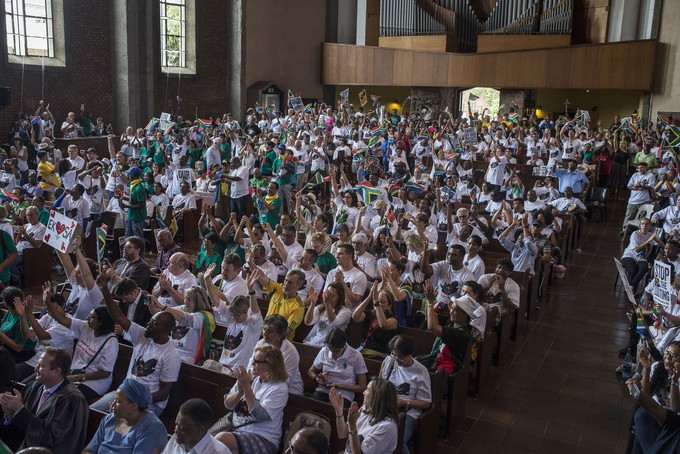 St Albans Church was packed with people today who answered the Save South Africa call to demand an end to state capture.

A festive mood greeted protesters as they entered the St Alban’s Church in Pretoria for the Save SA protest. People beat on drums while calling for President Jacob Zuma to step down. The church was packed to the brim.

Meanwhile at Church Square thousands of members of the Economic Freedom Fighters (EFF) gathered. They waited for news from the High Court down the road regarding Zuma’s interdict against the release of the Public Protector’s report into state capture.

Church Square was all red as the EFF’s supporters came to demand “Zuma must Go!”

EFF members tried to break through a police barrier after they made their way to the Union Buildings. They were denied entry by the police who shut the gates.

Some EFF members split into groups and moved through the city blocking roads and setting construction materials on fire. Some shops were looted and damaged in the violence.

EFF members tried to break through a police barrier after they made their way to the Union Buildings. They were denied entry by the police who shut the gates.

At the Union Buildings clashes followed with police using rubber bullets and a water cannon.

Police attempted to disperse EFF members outside the Union Buildings.

AN EFF member runs away after he is sprayed by a water cannon outside the Union Buildings.

EFF members fought with each other as some tried to stop others from throwing stones at the police.

Eventually the situation calmed down. The protesters remained stationed outside the Union Buildings and dispersed after they were addressed by Julius Malema.

This photo of Floyd Shivambu (left of image in red beret) and Julius Malema (centre with shaven head) was taken by Shaun Swingler of Chronicle: