Mine workers remember the Marikana massacre 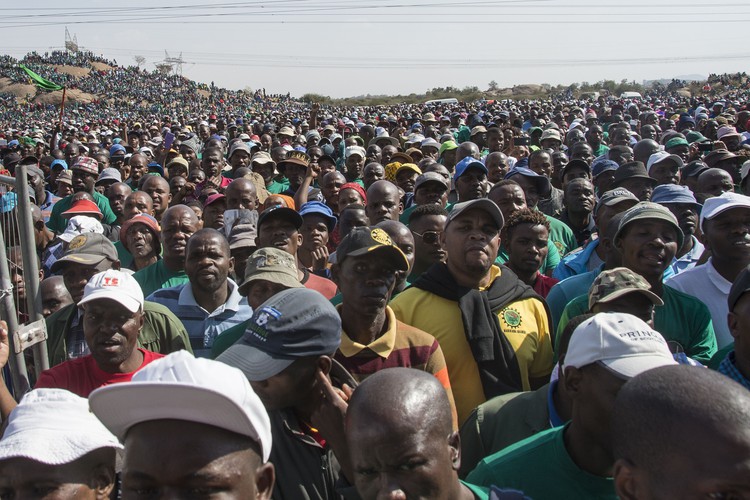 A large number of people gathered in Marikana to commemorate the massacre of 16 August 2012. Photo: Ihsaan Haffejee

Mine workers from across the platinum belt gathered in Marikana on Wednesday to commemorate the fifth anniversary of the Marikana massacre. Thousands of workers wearing the green colours of their union AMCU flocked to the open field where 34 of their colleagues were shot by police on 16 August 2012 while on strike for higher wages at the nearby Lonmin mine. Workers climbed the famous koppie where the massacre took place and sang songs honouring their fallen friends. “We were massacred for radical economic emancipation by the state,” read some of the T-shirts worn by miners.

Five years after the killing of the miners conditions in the nearby Nkaneng township remain largely the same. There is a large electricity plant near the township but electricity is carried past the shacks straight to the mining operations, leaving mine workers and their families without lights.

Leaders of opposition parties from Parliament were present, including the EFF’s Julius Malema and the DA’s Mmusi Maimane. “16 August must be remembered like June 16,” said Malema in reference to the Soweto uprisings of June 1976. “There is no difference. Working class people were killed by the government. We must continue to remember this day so that government does not repeat a similar mistake,” he said.

As yet no police officials or politicians have been charged. However, 17 strike leaders are facing charges relating to public violence linked to the strike.

Addressing the crowd, a survivor of the shooting, Xolani Ndzuza, said that it was the police who attacked first and not the miners. “We are now facing charges. Charges that we know nothing about. … We are being accused of killing our own colleagues and we have been told that we must be prosecuted. But there hasn’t been a single officer prosecuted,” said Ndzuza. He urged mine workers and the community to remain united as they fight the state.

Families affected by the killing of their loved ones have yet to receive any compensation from the government. Most of those killed were the sole breadwinners for their families.

Advocate Dali Mpofu, who represented the mine workers and families during the Marikana Commission of Inquiry, said that government was delaying the process and further torturing the people of Marikana. “It’s a disgrace that we are talking about five years and as yet not a cent has been paid towards the people,” said Mpofu. [Mpofu’s firm, however, has been paid several million rands for representing the miners. - Editor]

Goodman Jokanisi collected a flower wreath from the stage and made his way towards the spot near the Nkaneng township where his son Sami was killed. He laid the flowers down gently and said a silent prayer for his son who was 29 years old when he was gunned down. Jokanisi said that things had been difficult for the family since the death of Sami. “His [teenage] son hanged himself at school in January this year. The boy couldn’t cope without his father,” said Jokanisi. He is 61 and still works in the mines as he has to help support Sami’s remaining four children.