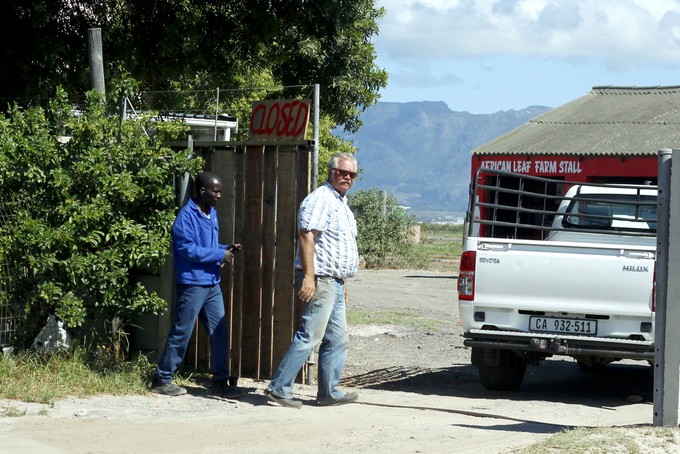 Leon Rix is the owner of a farm in Weltevrede Plaas in Philippi. Photo: Masixole Feni

Angry women farmworkers who say they were unfairly dismissed from a farm in Philippi have blockaded the gates of the farm, preventing the sale of produce.

The women accuse the farm owner Leon Rix of racism and ill treatment. He has denied the allegations.

According to Nocawe Booi, who has been working on the farm for six years, on 5 February, the group of about 20 permanent farmworkers at a farm in Weltevrede Plaas were given their wages and told to leave and return after a month because there was no work for them. The women agreed but on the same day, other workers had been asked to look for 20 casual workers to help out on the farm.

Nocawe Booi, one of the dismissed workers, says they were given their wages and told to leave and return after a month because there was no work for them. Photo: Masixole Feni

Another worker, Nomzwa Makhela who has been working on the farm for seven years, said as casuals the women were paid R100 a day instead of the R120 they had earned as permanent workers. This is below the legal minimum for a worker working nine hours a day. At the beginning of March the daily minimum wage for a farm worker working nine hours a day was raised from R120.32 to R128.26.

Makhela also said only the black workers had been dismissed and the coloured workers were still working.

According to the women, before GroundUp arrived on the scene, Rix had come to them with a knife and stick, threatening to kill them if they did not leave. They said Rix had refused to address them.

On GroundUp’s arrival, the women, who were gathered outside the closed farm gates, were stopping customers from entering the farm to buy vegetables.

While GroundUp was interviewing the women, Rix arrived in his white bakkie, parked it outside the gate, got out and took out a brown board from his car with big red words written “CLOSED”. He put the sign up on top of the farm gate.

When GroundUp approached Rix, he denied that the workers had been fired. “There is no work. I told them they should come back after Easter, after the rain. The people who are on the farm live here, and some of them who live in Vlei are just here for the carrots. There is no work, we don’t even have water.”

Looking over the fields, GroundUp could see numerous sprinklers watering the vegetables.

Rix denied all these allegations.

The women said they worked 11 hours a day, from 7am to 6pm. They lived in surrounding areas like Samora Machel, Crossroads and Philippi and most of them walked to work.

They said they were responsible for planting and taking care of the vegetables, which included cauliflowers, onions, cabbage and marrows. But they were adamant that no carrots were farmed.