Philippi land to be sold is not useful for farming, court told 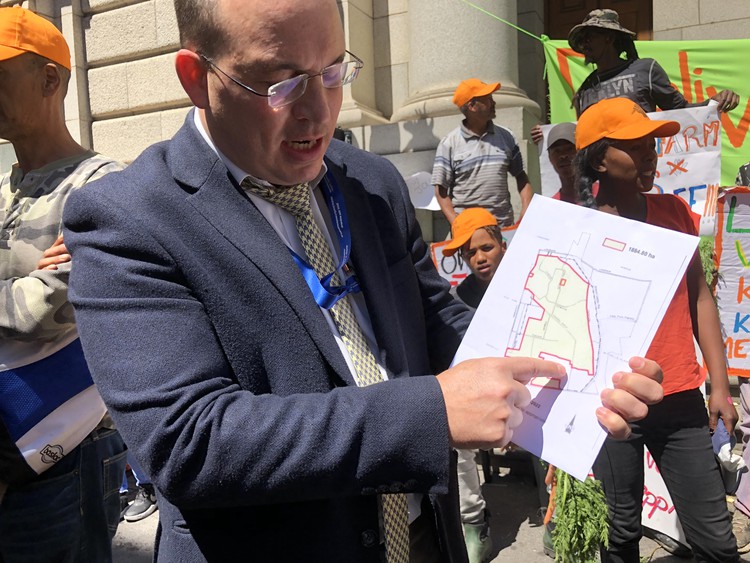 James-Brent Styan, spokesperson for the MEC, shows the 2012 boundary of the Philippi Horticultural Area (in yellow) and the Oakland land (in white). Photo: Madison Yauger

Farm workers packed the back rows of the courtroom on the second day of the campaign by Philippi farmers against the City of Cape Town and the MEC for Local Development, Environmental Affairs and Development Planning.

Workers and farmers like Nazeer Sonday, convenor of the Philippi Horticultural Area (PHA) Campaign, oppose development of the horticultural area. But the City is arguing that the area to be developed, belonging to Oakland City Development Company, is not part of the PHA.

On Tuesday, Advocate Murray Bridgman argued the merits of the PHA and the harm that would come from this development. Advocate Ron Paschke, on behalf of the City, said these claims were myths.

Paschke continued his arguments on Wednesday discussing the 2012 Cape Town Spatial Development Framework. He said the Oakland land was not part of an area with significant agricultural value. He said the City’s decisions were consistent with the 2012 spatial framework which applied at the time.

He also argued that the City had taken special considerations to protect the Cape Flats Aquifer which lies under the area.

“This city has a massive housing crisis,” said Paschke. “The City cannot be faulted for saying, with a massive investment opportunity like this, that this is desirable for this city and for the region.”

Emotions have run high throughout these proceedings. Workers sitting in the court shook their heads and wore solemn expressions during the arguments.

“This case is not about the loss of farmland. The entire argument is premised on the erroneous belief that the land is available for farming, and can be used to produce food,” Bawa argued.

Bawa said members of the campaign could argue that all land around the PHA should be used for agriculture because they did not have to deal with the social and economic pressures of the city, such as the masses of people without housing.

She said the MEC had considered all reports and environmental assessments when making this decision. She said the campaign had not said the development would harm the aquifer’s ability to provide drinking water, and said it was an uncontested fact that farming was more harmful to the aquifer than the development.

“Even if the land was farmed, there’s no guarantee the most vulnerable would benefit.”

Paschke and Bawa said they would not pursue costs against the campaign if they won.

Oakland Development’s advocate Michael Janisch made a brief argument referring to the delay of the development project. “This is a development that is sensitively and carefully planned, and will make a difference in protecting the ecology of that area,” he said.

In closing Bridgman denied that the campaign’s arguments were based on “myths”. He said “Oakland’s land will forever be part of the PHA for heritage purposes.” He conceded that fertilisers used in farming had damaged the aquifer but said there were measures to prevent this in future.

He argued that the MEC had “unlawfully” changed the Oakland land from agricultural to urban development, and it was the MEC’s decision, not the local authority that took the Oakland land out of the PHA in the 2012 spatial planning framework.