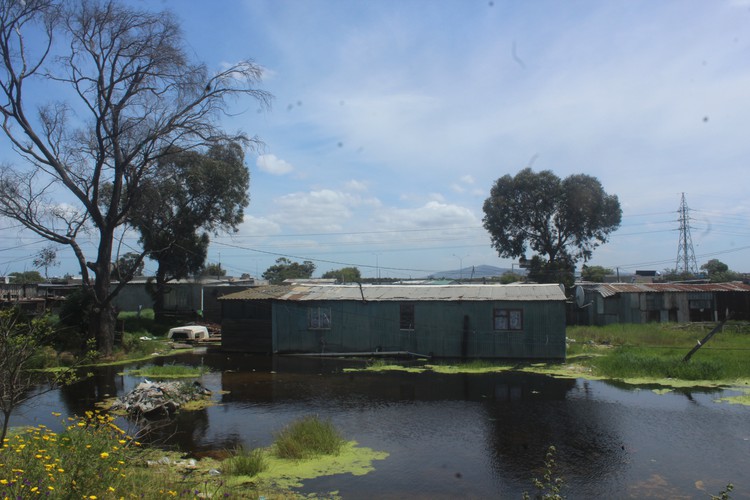 Residents of Klipfontein informal settlement near Govan Mbeki Road in Philippi say the community has been flooded for six months. Photos: Masixole Feni

Klipfontein informal settlement near Govan Mbeki Road in Philippi has been waterlogged for the past six months.

Residents say heavy rainfall and the lack of adequate drainage for stormwater has left the community flooded. This, however, has been an ongoing issue since 2013, according to the City of Cape Town.

Formed more than 40 years ago, Klipfontein Informal Settlement is yet to receive some basic services like water and electricity. There are about 1,000 shacks on the but some families have over the years built a few brick and mortar structures. They also rely on illegal connections for electricity. There are no standpipes but some families have found ways to connect water to their homes. The City has only given portable toilets for people to relieve themselves.

The residents say they were once promised houses by the City but were later told that services as well as housing could not be provided because their shacks are built on privately owned land.

Peter Hendricks, 43, claims to have lived in Klipfontein all his life. The shacks were moved to land next to the Cape Town International Airport decades ago to make a way for the N2 highway.

“The City has made it very clear to us that we do not belong to them. They are aware of this problem and we have been informing them. Last time they were here, they pumped water for a few minutes then switched off their machines. When I asked why they stopped, I was told that they received a call to stop draining the water because the land is private. They never returned,” said Hendricks.

He has since managed to buy a generator for R3,000 to pump the foul smelling stagnant water. Hendricks said every weekend he spends about R200 on petrol to pump the water to prevent it from flooding his home. “I’m a breadwinner. I don’t always have money but the situation is forcing me to always pump this water otherwise this dirty stinking water will go to my house … If you don’t do things yourself, no one will do it for you,” he said. 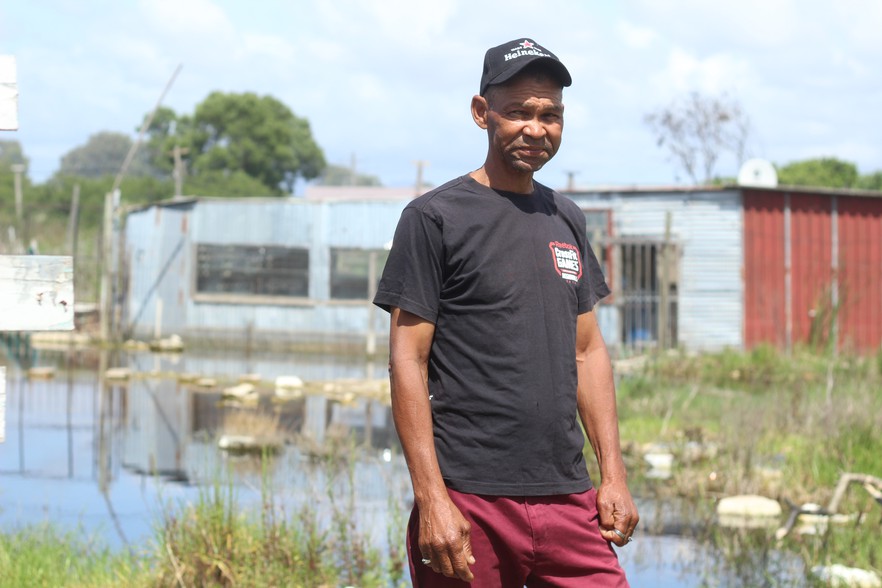 Resident Basil Botes, 39, had to abandon his shack and find another place to rebuild because of flooding. “We are not getting any service delivery. This is one of the forgotten areas,” he said.

Another resident Dawn Simpson said the only service delivery they received from the City were the portable toilets. They are collected from a central point in the area three times per week for cleaning.

The City’s spokesperson Luthando Tyhalibongo told GroundUp that the Klipfontein land belongs to the Methodist Church. According to him, the Roads Infrastructure Management Department conducted a site visit in September this year to inspect the stormwater system. It was found to be fully functional, he said.

Tyhalibongo said that pumping stagnant water from flood-prone informal areas “is not a sustainable solution” and as it is on private land, it would be the responsibility of the owners.

“The Stormwater By-law states that each resident or dwelling owner is obligated to channel stormwater runoff and deal with it sufficiently. These stormwater runoffs can be connected to our current stormwater infrastructure that is fully operational.”

The Methodist Church did not respond to our emailed request for comment by the time of publication.