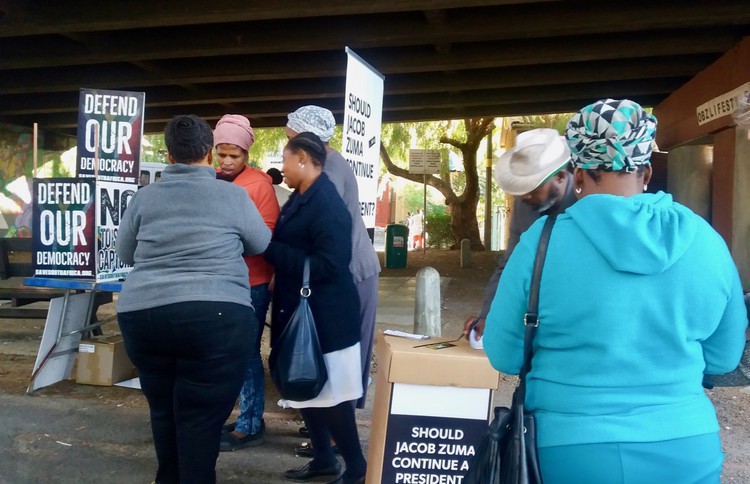 On Monday and Tuesday, a coalition of civil society organisations under Unite Behind and Save SA held a public poll at three train stations – Observatory, Rosebank and Mowbray, asking people to “vote Yes or No to the Jacob Zuma presidency”.

Since April, the two organisations have been holding the polls in different areas – Maitland, Plumstead, Tableview and Khayelitsha.

Lynne Wilkinson, one of the organisers, said, “The intention is to count the votes and present it in Parliament during the no-confidence vote against Zuma, and say this is what people want.”

“Different organisations are fighting for health care, clean safe toilets, social grants and education, but we believe Zuma is a barrier because of his corruption,” she said.

Wilkinson said commuters had been responsive and took time to vote even though they were rushing to work or home.

After casting her vote, Ma Dlamini [she did not give her first name] said Zuma should go because many black people were suffering.

David Lydall of Save SA said a few people, who want Zuma, were not happy with the campaign, but a lot of people were saying he should go.