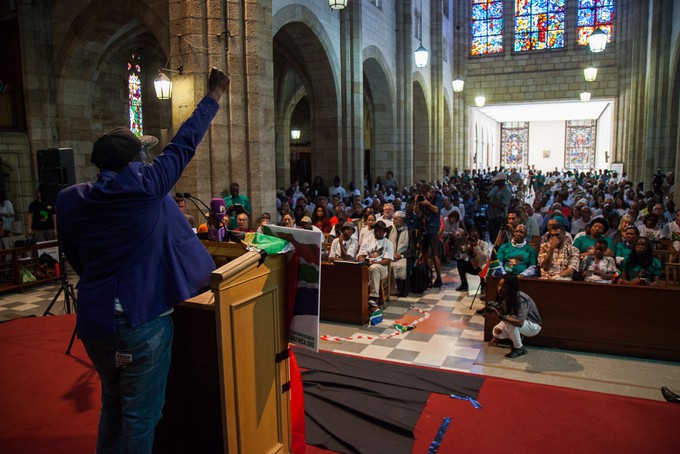 ‘The Real State of the Nation address’ was the slogan at St George’s Cathedral today, when over 300 people filled the church, carrying placards and wearing T-shirts with #SaveSouthAfrica on them.

The Save South Africa campaign and a number of civil society organisations gathered with members from various communities to hold a ‘People’s Assembly’. Congress of the People President Mosiuoa Lekota and his deputy William Madisha also attended the assembly.

Lawson Naidoo, Executive Secretary of the Council for the Advancement of the South African Constitution (CASAC), told the assembly, “This is an occasion that we have decided to put together to give voice to the people of South Africa to talk about the reality of our society, the crisis that we face; one that is being neglected by our government.”

Speakers from different organisations spoke about issues relating to their work.

Siphokazi Phangalele from Right2Know said: “This is a call for us as a nation to unite … Our government is making it a secret as to the dealings of the nuclear deal … Why is it being kept a secret if we will benefit from it?”

Sipho Pityana, chairman of AngloGold Ashanti and Izingwe Capital Limited, delivered the keynote address. “My dear President Zuma, you must know that as a nation we no longer have confidence in your leadership,” he said. “We have seen here, today, young and true leaders, which should be capable of taking our country to its true destination.” He ended by calling for Zuma to resign.

“We must be steadfast in our demand for accountability. We must reject those who undermine our democracy. They must be stopped and we must bring the society that is founded on democratic values that we fought for enshrined in our constitution,” said Pityana.