Cleaners say they pay for their own cleaning materials 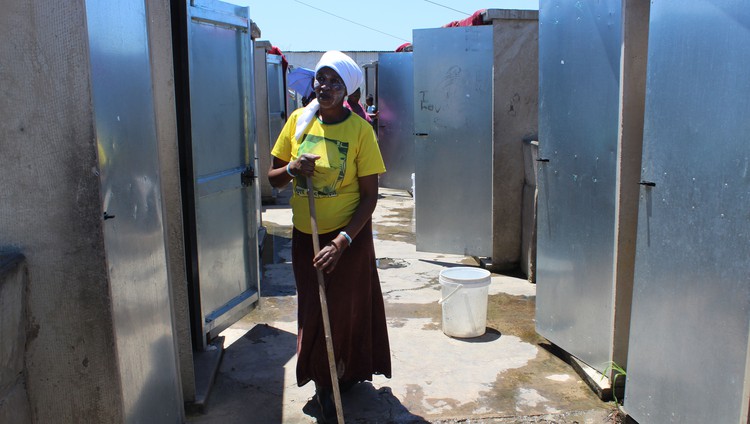 Siziwe Lolwana has to clean 20 toilets without having received the necessary cleaning materials or protective gear from the Buffalo City Metro Municipality. Photo: Nombulelo Damba-Hendriks

Janitors working under the Buffalo City Metro Municipality’s Expanded Public Working Programme (EPWP) say they have been working without any protective gear for years. The toilet cleaners also say they pay for their own cleaning detergents and equipment.

GroundUp spoke to toilet cleaners from Fynbos, Silver Town and Mdantsane informal settlements. They all complained of having to work without protective clothing, they don’t get days off and often receive their salaries late.

When they try to contact their supervisor Bonisile Mvulane, he dodges their calls, they say. GroundUp contacted Mvulane but he refused to respond to our questions.

In some informal settlements like Fynbos, one janitor is expected to clean 20 toilets without being given any protective gear. Residents have since begun collecting R2 per household per month to hire a second janitor after, they say, Mvulane refused to hire more cleaners. Siziwe Lolwana, 55, says she cleans toilets shared by 240 families.

In Silver Town, GroundUp spoke to a cleaner who identified himself as Svij. He said he started working in 2013 and earns R2,300. He cleans ten toilets daily but does not have gloves, cleaning chemicals or protective gear.

Svij says that when he asked Mvulane for working clothes and chemicals Mvulane told him to wait for 2020.

“We are working because we need this job. To me it is like I earn R1,800 because I use R500 on cleaning material,” he said. “I cannot go to the village to be with my family during this festive season because I do not have leave.”

Fynbos residents say they decided to hire Lolwana in September 2018 after a cleaner hired by the municipality was on sick leave for two months. Lolwana says she has to raise four grandchildren on her salary because her husband does piecemeal jobs. During her first month, residents were only able to contribute R40 towards her salary.

By the end of November the payment increased to R120 per month, she says. “I decided to take the job because I believe that people have a right to use clean toilets. But the challenge is not having cleaning material.” She uses her own broom and residents donate cleaning materials.

In Mdantsane, a cleaner who asked not to be named says she often has to unblock toilets herself using a wire and without any gloves or other gear.

The same questions were again sent on 8 January and followed up with several phone calls. No response or acknowledgement was received by the time of publication.