Evictees claim they improved the place while their neighbours describe it as a “den of prostitution, crime, and drugs” 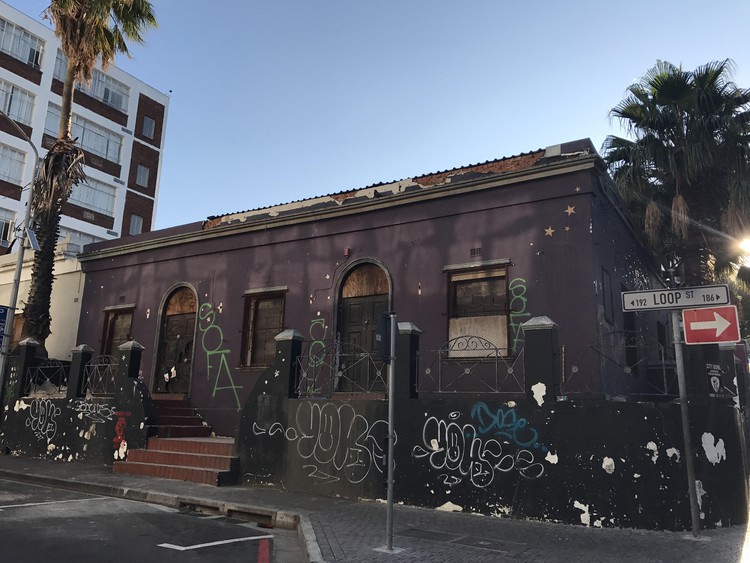 The former Madame Zingara and Ivory Room properties have been occupied by people desperate for shelter. Photo: Natalie Pertsovsky

By Lilly Wimberly and Natalie Pertsovsky

This is a breaking story and GroundUp has not yet had an opportunity to clarify some details.

About 20 people were forcibly removed from where they had made their home in the Cape Town CBD on Tuesday. They were staying at the buildings known as the Ivory Room and the former Madame Zingara on the corner of Buiten and Loop streets. (Please note that as far as GroundUp is aware, Madame Zingara has nothing to do with the building anymore, and we refer to it by that name in the remainder of the article simply for convenience.)

The residents were removed by security guards working for the Central City Improvement District (CCID).

It is understood that the two buildings had stood abandoned for some time before being occupied by the current residents. Several years ago a fire severely damaged some of the property.

“We don’t know what is going on,” said Mumsa Sweke, who is from the Democratic Republic of Congo. He said he has been living in the buildings for five years. “Nobody had ever told us to move before.”

Another tenant, Esmerelde Champion, who has been residing there for four years said she and her fellow residents had improved the place. “There were people before we moved in here who always used to do unsavory things outside,” she said. “We stopped all of that.”

Sweke and Champion believed that neighbouring businesses had ordered the CCID to evict them. However, when GroundUp approached the nearby Eurohaus Bakery that they thought was involved, the manager said he did not know about the eviction. An employee at a flower shop across the street also denied knowledge of the eviction.

However people in the R+N building that overlooks the former Madame Zingara property shed some light on the situation.

Steven Whitman leases a space for his business in the R+N building. “We’re the guys who deal with what’s going on there on a daily basis,” he told GroundUp. He also described a meeting that took place last week in the R+N building at which the CCID, the ward councillor and other interested parties decided that action had to be taken against the people staying in the former Madame Zingara and Ivory Room buildings.

Whitman and his landlord Brian (he gave no surname) took a GroundUp reporter to a balcony in the R+N building with a top-down view of the properties where the eviction took place. From there it was possible to see there is no roof (although metal sheets provide partial shelter). Rats could be seen running about.

“CCID has been in and out of here for the past couple of months,” said Brian. He said that city officials went onto the balcony at the meeting last week. “[Officials] hadn’t seen [the building] from this vantage point and they undertook to get some action from the owner.”

Brian called the building “a den of prostitution, crime, and drugs” with “continual fires inside”. He said that the owner had the openings of the building bricked up yesterday but “[the residents] had kicked the bricks out and gained access again.”

Meanwhile the evictees told GroundUp they did not know where they would be sleeping tonight, nor how they would eat because their belongings remained locked inside the properties. At the time of publication GroundUp has been unable to reach the CCID for comment. In particular, we have not been able to find out if there was a court order sanctioning the eviction.

Sarita Pillay, an organiser with Ndifuna Ukwazi, an organisation concerned with housing rights that was at the scene of the eviction, told GroundUp that many of the evictees work as car guards in the city centre and are “very vulnerable”. Pillay said “they are now left homeless in the middle of winter”. She questioned the legal basis for the CCID’s actions.