People with albinism march in Durban 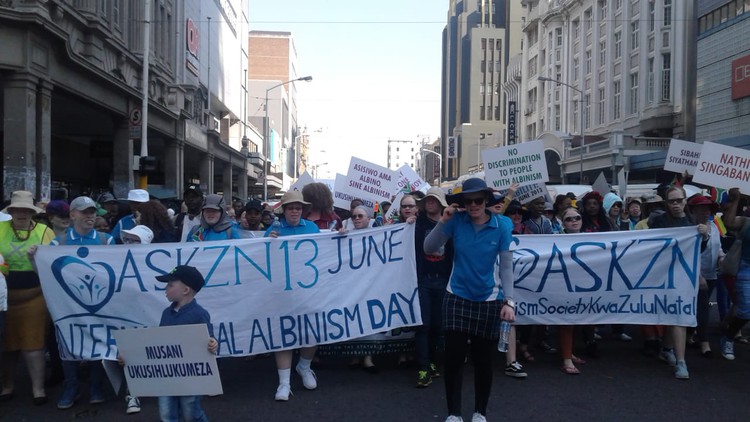 Hundreds of people with albinism marched in Durban on Wednesday. Photo: Nompendulo Ngubane

Hundreds of people with albinism marched in Durban on Wednesday to commemorate World Albinism Day and to mark five years of official acknowledgment of albinism as a disability.

Marchers from all over KwaZulu-Natal walked from Dinizulu Park to the Durban City Hall. They came from AbaQulusi, Manguza, Uthukela and Ugu, and included disability organisations and families affected by the murder of family members with albinism.

The chairperson of the KwaZulu-Natal Albinism Society, Maxwell Thabethe, said the march was to celebrate the acknowledgment of albinism by municipalities and government departments.

“Today we celebrate five years being declared as people with disability. Before June 13, 2013, we did not have an identity. People with albinism were discriminated against.”

He said people with albinism had been isolated but now felt more accepted and able to participate in society.

“Different government departments are beginning to gain trust from people with albinism. They are giving them learnerships and internships,” said Thabethe.

“We are now visible. With the help of trained social workers the Department of Social Development is acknowledging us. We have established a strong relationship with the Department of Health. In some hospitals in Durban, people with albinism get emotional support and professional skin care,” said Thabethe.

“When we report these cases to the police, the normal answer is ‘we can’t open a case because no one was injured’”.

Thabethe said with help from the authorities they hoped to win the battle.

Zulmira Nhatave from Esikhawini lost her 14-year-old brother in 2011. He was living with albinism. The family still does not know what happened, she said.

“His disappeared without a trace. What we know is that he was seen coming from school. He was seen with someone. That was the last day we saw him,” said Nhatave. “We opened a case with the police. The police have told us nothing until this day.”