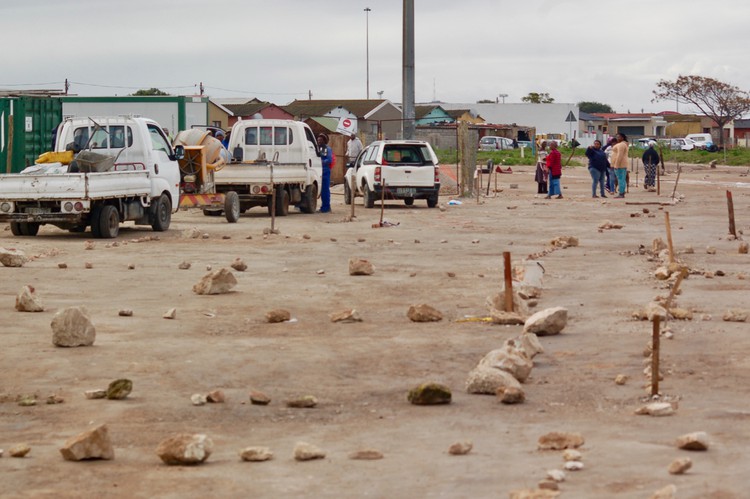 As a form of protest, residents demarcated would-be plots with stones and poles for houses at the site offices of Siyaya Khaya consruction workers. Photo: Thamsanqa Mbovane

About 200 residents of Motherwell, Port Elizabeth, protested at the gates of the office of ward 55 Councillor Mzuvukile Tom (ANC) on Friday. They carried sticks, blew whistles, burnt tyres and sang songs.

The protesters, from informal settlements of Ramaphosa, Endlovini, Tyoksville and Shukushukuma, were complaining about poor services in their ward. They were also demanding jobs on local public work projects.

Resident Sivuyile Xego said there was “a lack of transparency from Councillor Tom … He is dividing us by employing the same people in every project.”

Residents stopped the paving of Machell Street and told workers of Siyaya Khaya Construction to go home. Protest leader Mbulelo Taaibos, using a loud hailer, said: “This street will be paved by the people who live on it. We don’t know these SMMEs and the workers are from northern areas … Pack your things and go … We don’t want to see you here again.”

A resident of Machell Street who did not want to be named said, “We don’t approve of the closure of this project to pave Machell Street. These protesters are scaring us and most are from Shukushukuma.”

“We are losing a lot. We have been told to stop doing pipelines and roadworks at Machell Street,” said site manager Rafique Barry. “We have about 30 workers and we took them from this area,” he said.

When the Siyaya Khaya workers left and went back to their site office in ward 58, they found that as a protest the place had been demarcated with stones and poles into would-be plots for houses.

Tom said he never employed people without being transparent to the community and he always called meetings. “They are disrupting service delivery meant to benefit themselves,” he said.

Speaking for the municipality Mthubanzi Mniki said it condemned the disruption of services. “We have always said that Nelson Mandela Bay is one, and is inclusive of Uitenhage, Port Elizabeth and Despatch … We want everyone to benefit from anywhere in the work that is being given by the municipality … Someone from Motherwell must benefit from Walmer and someone from Walmer must benefit in Motherwell.”