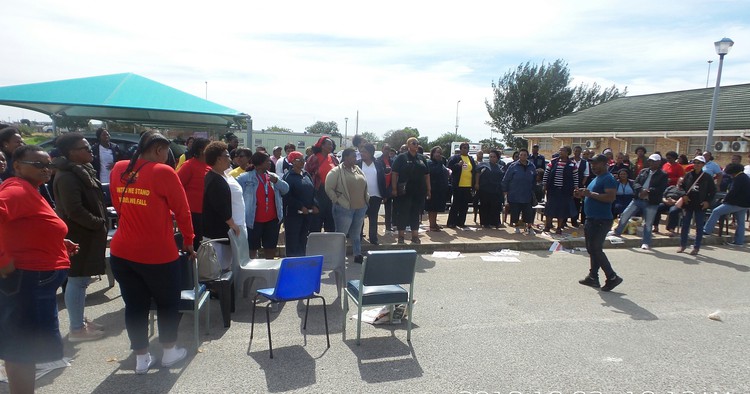 A strike at the Motherwell Community Health Centre, Port Elizabeth, that started last Wednesday has escalated with nurses at all clinics in the township joining the strike.

Clinics in all sections of Motherwell did not open on Tuesday, including those in Wells Estate and Ikamvelihle.

The medical staff accuse the provincial health department of putting their lives in danger after assaults by angry patients and criminals.

A meeting held yesterday by representatives of the MEC at the Motherwell Community Health Centre could not sway the striking workers as they demanded to be addressed by Mabuyane, Gomba and Mbengashe.

“They sent us people who have no clue about what is needed in our clinics,” said Combined Labour shop steward Nomonde Fanele about Monday’s meeting, which she described as fruitless. (Combined Labour is an umbrella name for several trade unions.) “That is not what we had expected. The Department of Health is aware of our demands that we need to meet Premier Mabuyane, MEC Gomba and Dr Mbengashe. That is non-negotiable.”

A key demand is for security guards to be placed in consulting rooms. But the department’s communication head Siyanda Manana said the department will not allow this. “Patient confidentiality is paramount and we can not allow non-clinical staff in examination rooms,” said Manana.

Deputy chair of Motherwell’s NU8 clinic committee Kholeka Lugalo said her clinic had been a target of burglaries on several occasions. “We are facing a huge challenge at our clinics. Criminals are not only assaulting patients and staff, they are breaking into the clinics at night and stealing medicines, computers, printers and other valuables,” said Lugalo. “There is a need for a comprehensive awareness campaign to educate residents on the importance of our clinics. We also discourage people from buying stolen property and that they should report criminals to police.”

Three women told GroundUp that they were turned back at the Ikamvelihle clinic. All of them have asthma. “We came to get new breathalysers but the nurses said they are not attending to patients. They are not to blame but criminals who are robbing them. This puts our health at risk,” said one of the women.

Manana said MEC Gomba will visit Port Elizabeth on Wednesday to assess the security arrangements and meet the community.

“The department has prioritised staffing issues and we will be appointing and replacing the staff that have resigned,” said Manana. “We will use fast track appointments and get additional security staff closer to the consultation area.”