Workers demand back pay, but City says it doesn’t have the money 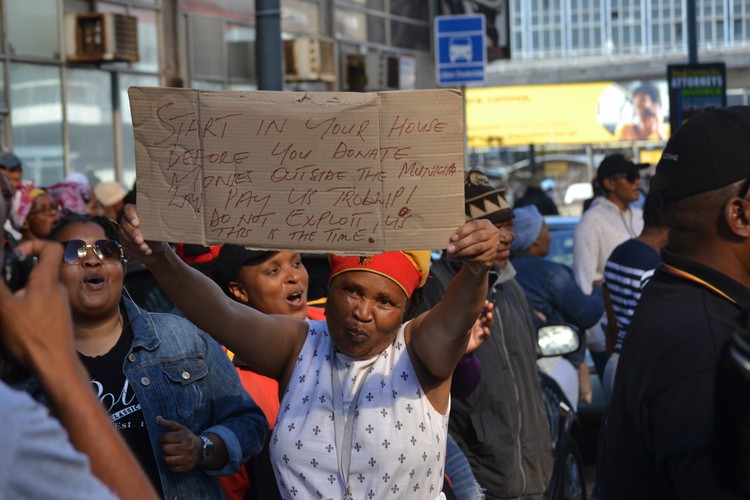 The South African Municipal Workers Union (SAMWU) issued a notice to strike on Wednesday night. On Thursday about 450 workers blocked Lillian Diedericks and Mfanasekhaya Gqoboshe buildings in Govan Mbeki Avenue. The two buildings are where most of the municipal service transactions are conducted, including paying for services.

Striking workers also closed municipality buildings in New Brighton and Uitenhage. Services such as refuse collection and paying of municipal bills were affected as workers joined the strike.

Workers said the strike came after failed discussions with municipality.

SAMWU Port Elizabeth regional chairperson, Nomvula Hadi, explained a range of grievances to GroundUp. These included disputes over allowances, insourcing of long-term contract workers, the presence of lawyers at disciplinary hearings, and reinstatement of suspended workers.

But the most critical demand appears to be for back pay for nearly “3,000 workers who lost their benefits after the amalgamation of Port Elizabeth, Despatch and Uitenhage to form Nelson Mandela Bay Municipality”. Hadi said each worker who was affected by the amalgamation should be paid R30,000.

Kupido Baron, spokesperson for the the municipality, said that the City would have to get more money to pay workers their back pay. He acknowledged that the strike was protected, but “we were only informed that the strike action is about the long service bonuses”.

He said the matter would be tabled at the next Mayoral Committee and the Municipal Council after that. He said the demands had major fiscal implications.

“It is in our interest to resolve this issue with as little impact on service delivery as possible. Hence, our doors are open for negotiation. Our refuse removal service was affected today with three customer care centres closed (Mfanasekhaya Gqoboshe, New Brighton and the Uitenhage Town Hall). Both our Traffic Departments were open but we did not have cashiers to process transactions at the Uitenhage Driving Licence and Testing Centres,” Baron said.

Protests intensified on Friday. SAMWU members marched in the morning to City Hall where they handed over a memorandum of demands to the Executive Director for Human Settlements Nolwandle Gqiba.

Rubbish has begun accumulating in the suburb of Korsten as a result of the strike. We have received an unconfirmed report said that other trade unions with members who work for the municipality will join the strike on Monday.