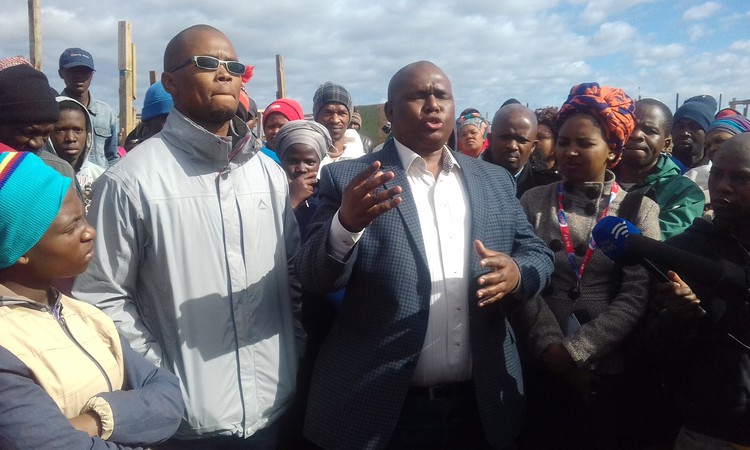 Hundreds of land occupiers in Port Elizabeth breathed a sigh of relief on Tuesday when the deputy mayor told them that the municipality had been wrong to evict them without giving them alternative accommodation. He also promised them that their confiscated belongings would be returned.

Nelson Mandela Bay Municipality Deputy Mayor Mongameli Bobani (UDM) reassured the people of Ehlovini in Wells Estate that he would bring their plight before a full council this week.

They had occupied a large piece of land earlier this year. The Office of the Sheriff executed numerous evictions on behalf of the municipality which ultimately led to the residents losing their building materials and household furniture.

Angry residents yesterday took turns to air their grievances to Bobani. They also slammed Mayor Athol Trollip (DA) for failing to come and address them in person.

Resident Siphokazi Hlalu said: “We have been expecting Trollip to come and assess the situation himself but he sent [Head of Human Settlements] Nqaba Bhanga. Nqaba failed to correctly read the situation because he told the municipality that there were only 20 shacks on this site. There were more than 600 people in many shacks. His report paved the way for all the evictions.”

“Each time we invited Trollip, he would respond by sending the police to teargas and arrest us. Most people are not working. They are forced to use their social grants to pay for rent. We need people who deserve their own houses to be given them or we will continue with the protest action,” she said.

Another resident, Yongama Mrototo, said they had written four invitations to Trollip. But the mayor had not responded.

Mrototo said, “We are tired of the mayor’s silence. We need an assurance from him that we will be moved to another place. We don’t want to continue protesting. We also request that two of our members be allowed to attend the council meeting when our case is being debated.”

He said the first letter had been written on 13 July under the name of “Motherwell Invaders”, representing residents of Ramaphosa, Wells Estate, Ikhamvelihle and NU29.

Bobani said he had waited in vain for the mayor to intervene. “This makes the residents lose confidence and stop respecting this municipality. People have no shelter to put over their heads. He should have come to see it himself. So when the residents approached me, I said I had to go and meet them.”

“It’s not about Trollip, it’s all about solving the problem that is happening here. People are not working. Their belongings were taken by the Office of the Sheriff. They want a place to sleep.” Bobani said the law did not allow the eviction of people without providing them with alternative accommodation. “We are going to investigate how this happened. We should also know who signed on behalf of the evicted people and whether the order was in accordance with the law. People don’t know how to recover their property.”

Bobani said people should be screened and there should be a list of those desperate for houses. “There’s a lot of corruption in the housing department that we have to address. I will take this issue to our council meeting on Thursday,” he said.

In a statement, the Nelson Mandela Bay Municipality said the municipality was “perturbed at the alleged comments attributed” to Bobabi “regarding the recent evictions of people occupying land illegally in the Motherwell area.”

“Forced evictions are a countrywide phenomenon that is guided by the law and we have to follow legal processes to the letter when carrying out evictions. Constitutionally, the municipalities are legally empowered to exercise by-law enforcement to ensure stability within our jurisdiction.”

“The municipality has had numerous engagements with the community of Wells Estate to discuss our housing development plan and how this is being rolled out.”

“Every parcel of land in Wells Estate is zoned for a different purpose and as such the municipality would jeopardise its long term housing development strategy if it allows land invasion. Ward 29 has been identified for human settlement and the municipality is currently developing the area.”