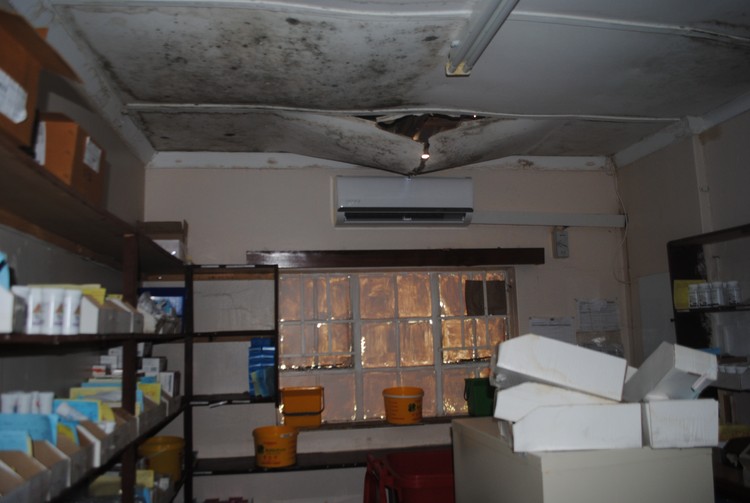 Patients at Newtown clinic in Fort Beaufort say when it rains, the roof leaks and nurses have to put buckets out. Photos: Mkhuseli Sizani

Patients in Fort Beaufort, Eastern Cape are complaining of being turned away from four clinics because of staff and medicine shortages, and storm-damaged infrastructure.

According to dozens of people we spoke to, some of the clinics have been running out of chronic medicines for diabetes, hypertension and HIV since November. Also, the storm that hit the town in December damaged roofs, windows and doors of the clinics. Some patients reported having to wait for hours to be helped. They also complained that the toilets were not working properly and rubbish in and around the facilities had not been collected. At one clinic, livestock was grazing in the overgrown bushes.

The provincial health department says the medicines have been delivered since we sent them questions, and that the infrastructure damage will be fixed and more staff hired during this financial year.

This week, we joined the South African National Civic Organisation (SANCO) leaders who visited a few of the clinics. The visit follows a protest by about 200 residents who were angry about the services at the Hillside, Newtown, Lulama Kama and Thozamile Madakana clinics. 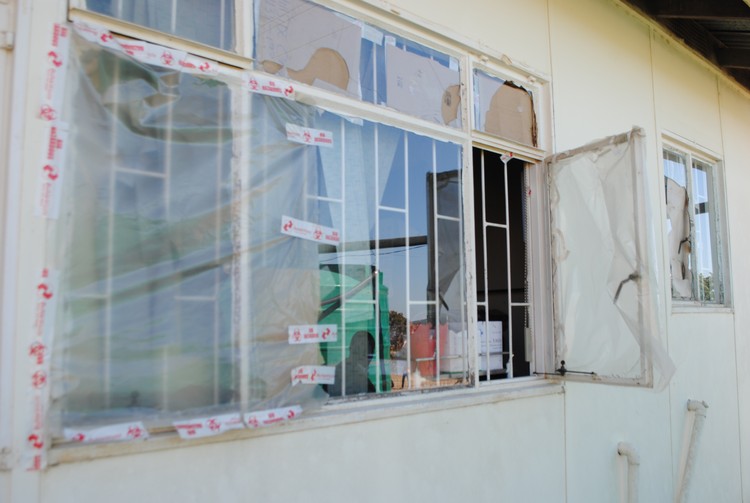 The windows at Hillside clinic were damaged by the storm that happened in December. Staff use plastic bags and cardboard to close the gaps but this doesn’t keep out rain and cold winds.

Zwelakhe Stofile, SANCO chairperson in Ward 20, said they had received a number of complaints about the poor service. “There is a serious shortage of medicine, especially chronic medication and staff in our clinics. There are no ambulances for emergencies. Doctors don’t visit our clinics,” he said.

Stofile said they had previously notified the health department’s district office and were promised that the issues would be resolved but nothing was done. “The problem has become worse this year because patients are no longer receiving chronic treatment and are being turned away.”

Stofile lives next to the prefabricated clinic. He said people are seen standing in long queues from as early as 4am until the clinic opens at 8am.

He said the recent storm severely damaged the windows of the prefab structure. Staff have used cardboard and plastic bags to cover the open spaces but the roof still leaks when it rains and the walls have gaps, making it cold inside. One of the three toilets is being used as a storeroom and the remaining flushing mechanisms are faulty.

Patient Xolisa Sika, works as a gardener and injured his foot in February while working. “I came to this clinic with the hope of getting help. But I was told there were no painkillers,” he said.

Another patient, Simanye Mathe, 41 said he used to collect his chronic medication in Cape Town until he moved last year. “The service has been very poor. Every time I come to collect my treatment I’m told that the priority is patients who are regular because there is a shortage of medication.” 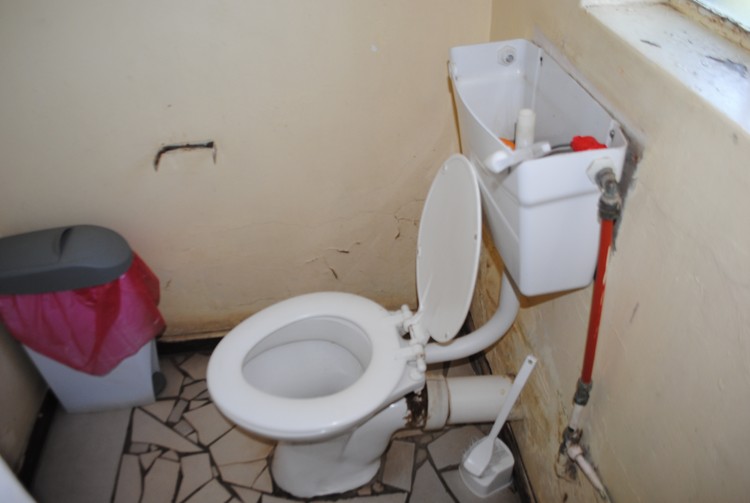 This is the only toilet available for all patients visiting the clinic in Newtown.

Patient Simnikiwe Mini said that when it rains, the roof leaks and nurses have to put buckets out. “We are squashed into a corner where there are no leaks. There is only one toilet for female and male patients and the flushing handle is broken.”

Zukiswa Jacob, 63, said she was turned away last week after being told that there was no medication. She had to spend an additional R30 taxi fare to the nearest doctor. 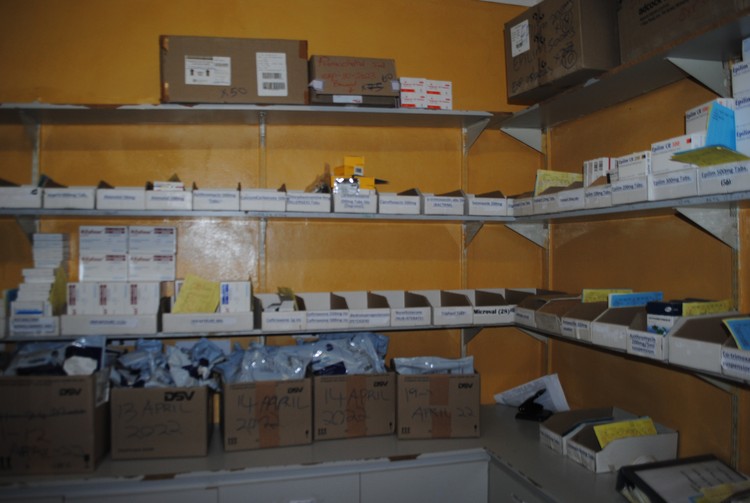 The clinic was without some chronic medicines for three weeks. Here some boxes still stand empty while staff wait for new stock

Clinic committee secretary, Nonkosi Harmans, said that they were without some medication for about three weeks. Harmans said there have been delays from where they order medication at the Gqeberha Medical Depot.

“We go to nearby hospitals and ask for medication to keep our clinic running. There are about 400 patients collecting their chronic treatment here and are yet to receive it,” she said.

“We need a nurse for dressing wounds and emergencies. The current staff we have are too old. A community service nurse’s contract was not renewed, a permanent cleaner retired and our cleaner is not coping with the work,” Harmans said. Other issues at the clinic include leaking roofs, broken windows and unkept grounds. 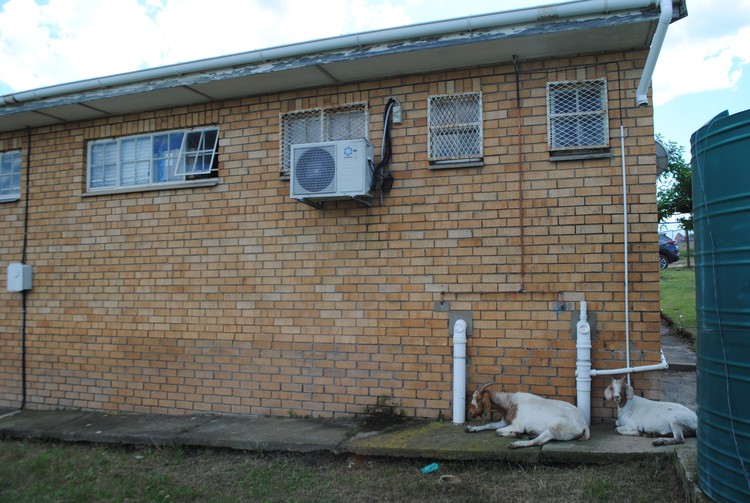 Goats were seen grazing outside Lulama clinic which had a broken fence and gates too.

The clinic is between Nkukwini and Empolweni townships and will soon be merged with Thozamile Madakana Clinic due to low attendance numbers.

Lindile George, a newly elected committee chairperson, said the facility was in “crisis”. He said they only had one nurse and the service is at a snail’s pace. “Blood samples are temporarily kept in the fridge in the kitchen where staff keep their food. Patients share a toilet in the prefab which has been faulty for years,” he said.

But when we checked on Thursday morning, some clinics had still not received their medicines.

On staff shortages, Dekeda said the department would be addressing this issue during the year within its budget constraints. She said funds are available to repair clinics that were badly damaged. She said they are in the process of getting contractors to fix facilities in Fort Beaufort and Winterberg.